Thomas D'Urfey (Tom Durfey) (1653 – 26 February 1723) was an English writer and wit. He composed plays, songs, and poetry, in addition to writing jokes. He was an important innovator and contributor in the evolution of the Ballad opera. 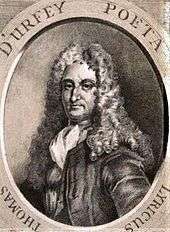 D'Urfey was born in Devonshire and began his professional life as a scrivener, but quickly turned to the theatre. In personality, he was considered so affable and amusing that he could make friends with nearly everyone, including such disparate characters as Charles II of England and his brother James II, and in all layers of society.

D'Urfey lived in an age of self-conscious elitism and anti-egalitarianism, a reaction against the "leveling" tendencies of the previous Puritan reign during the Interregnum. D'Urfey participated in the Restoration's dominant atmosphere of social climbing: he claimed to be of French Huguenot descent, though he might not have been; and he added an apostrophe to the plain English name Durfey when he was in his 30s.

He wrote 500 songs, and 32 plays, starting with The Siege of Memphis in 1676. His first play was a failure, but he responded in the following year (1677) with a comedy, Madame Fickle, which proved more successful.

His plays include The Fond Husband (1676), The Virtuous Wife (1680), and Wonders in the Sun, or, The Kingdom of the Birds (1706). In 1698 he wrote The Campaigners as a reply and satire of Jeremy Collier's anti-theatrical scourges. His multi-volume Wit and Mirth, or Pills to Purge Melancholy, written between 1698 and 1720, is a collection of songs and ballads. His play The Injured Princess is an adaptation of Shakespeare's Cymbeline. Durfey wrote widely in a witty, satirical vein, usually from a courtly point of view, and his works are a compendium of comedic ideas.

His songs generally fell into three types: court songs, political songs, and country songs—the latter tending to be more than a little bawdy. (The Fart was one of his hits; The Lusty Young Smith was another.) Over forty different composers set his lyrics to music, including Henry Purcell. Purcell composed music for D'Urfey's play The Comical History of Don Quixote (1694), one of the first stage dramatizations of Cervantes's celebrated novel.

D'Urfey wrote tunes himself as well, though even he admitted that they were not very good. Many of the songs lyrics in Wit and Mirth are preceded by their melodies written in musical notation.

D'Urfey was a friend of the great essayists Joseph Addison and Richard Steele; but, as was not atypical of the time, he also quarreled energetically with other poets and writers. He wrote parodies, and was parodied in return. He stuttered slightly—except, it was said, when he sang or swore. At one point in his career, a jealous rival would respond to D'Urfey's play Love for Money with a parody called Wit for Money, or, Poet Stutterer.

He was buried on the day of his death at the fashionable church of St James's, Piccadilly in London. His lasting achievement lay in his best songs: 10 of the 68 songs in The Beggar's Opera were D'Urfey's.

"All animals, except man, know that the principal business of life is to enjoy it." — Thomas D'Urfey.