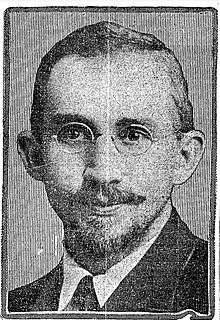 Leon Chester Thrasher who died on the RMS Falaba

The Thrasher incident, as it became known in U.S. media, nearly became the start of America's involvement in World War I. On March 28, 1915, the British steamship RMS Falaba was torpedoed and sunk by German U-boat U-28. In the incident, 104 people were killed, including one American passenger—Leon Chester Thrasher, a 31-year-old mining engineer from Massachusetts.

After the issuance of captured British orders, all merchant vessels were directed to paint over their names and ports of registry and to fly under the flag of a neutral nation. They were instructed not to stop when challenged by a submarine but instead to open fire at once or, if unarmed, to attempt to ram the sub. In response, German orders came from Kaiser Wilhelm who declared that as of February 18, 1915, the waters surrounding England, including the Channel, were a war zone. Any merchant ship found in that zone would be immediately destroyed without first determining if the ship were neutral.

In response, the British issued an Order in Council proclaiming a complete embargo on trade with Germany, denying her not only munitions but all other goods. The American government, led by President Woodrow Wilson and Secretary of State William Jennings Bryan, responded with a protest to the British government; they saw no need to starve Germans. Americans were not yet prepared to enter the war.

Intense media scrutiny and public pressure mounted, demanding American response after the sinking of the Falaba, which was widely reported as nothing short of a massacre of innocent civilians without warning. A Note was prepared by President Wilson to Germany, though he knew that the implications would likely lead to a declaration of war.

The following information is based on statements by the Imperial German Government, and may be said to reflect the official view taken by the German Empire of the incident.

After persistent requests by Secretary of State Bryan, documents detailing witness statements from the sinking of the Falaba offered proof that the captain of U-28 gave adequate warnings and time for the Falaba to offload passengers. Instead, the crew of the Falaba had used that time to radio the position of the submarine to nearby armed British patrol ships. As the warship approached, the submarine fired at the last minute — and detonated nearly thirteen tons of contraband high explosives in the Falaba's cargo. [1] This discovery allowed a diplomatic delay in the American response and the decision of whether to go to war.

Thrasher's remains washed ashore on Ireland's coast on July 11, 1915, after being in the water 106 days. Initially, authorities mistook him for a RMS Lusitania victim and designated him Body No. 248.[2]