For other uses, see Tissot (disambiguation). 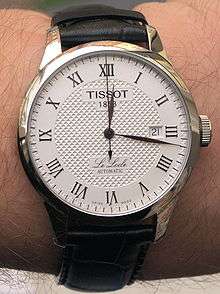 Tissot /tiˈsoʊ/ is a Swiss luxury watchmaker.[2] The company was founded in Le Locle, Switzerland by Charles-Félicien Tissot and his son Charles-Émile Tissot in 1853.[3]

Tissot is not associated with the Swiss watchmaking firm, Mathey-Tissot. Tissot is a subsidiary of The Swatch Group.

Tissot was founded in 1853 by Charles-Félicien Tissot and his son Charles-Émile Tissot in the Swiss city of Le Locle, in the Neuchâtel area of the Jura Mountains.[3]

Tissot introduced the first mass-produced pocket watch as well as the first pocket watch with two time zones in 1853[1] and the first anti-magnetic watch in 1929–30. Charles-Emile Tissot left for Russia in 1858 and succeeded in selling their savonnette pocket watches across the Russian Empire.[1] The Tissot company was also the first to make watches out of plastic (IDEA 2001 in 1971), stone (the Alpine granite RockWatch in 1985), mother of pearl (the Pearl watch in 1987), and wood (the Wood watch in 1988).[3] Tissot merged with the Omega watch making family in 1930 and Tissot-Omega watches from this era are sought after by collectors.

Tissot has been a member of The Swatch Group Ltd. since 1983, the largest watch producer and distributor in the world. [4] Still based in Le Locle, Switzerland and marketed in 160 countries around the world. Tissot watches are currently classified by Swatch Group as "mid-range market" products.[5]

Tissot is an official timekeeper for the world championships in cycling, motorcycling, fencing and ice hockey, and was used for the Davis Cup in 1957 and Downhill Skiing in Switzerland in 1938. Tissot was also a key Sponsor for the Formula one teams Lotus, Renault and Sauber. Tissot's first engagement as an official timekeeper was in 1938 where they timed a series of Ski races in Villar, near the company's home town in the Jura mountains.

For early events, handheld stop watches were sufficient to provide official timings. Today Tissot works with various sporting bodies to develop systems to produce ever more accurate timings for specific events. In competitive cycling for instance, sensors are placed on the bikes and track which are then linked by computers to provide track timings and performance data.

Tissot introduced its first tactile watch, with "T-Touch," technology in 1999; watches containing this technology have a touch-sensitive sapphire crystals to control various functions like compasses, barometer, altimeter and thermometer. The latest models in the T-Touch series. The T-Touch Expert Solar and T-Touch Lady Solar holds 25 functions [6]

Tissot has been an official sponsor of the IIHF Ice hockey World Championship since 1996. The prolonged agreement provides the company with a comprehensive package of rights, including perimeter board advertising in prime camera view, hospitality and promotional opportunities in and around the arenas. Tissot will be part of a strong sponsor line-up for the annual championship, including official main sponsor Škoda, which also recently prolonged its involvement through to 2017.

Tissot is the Official Timekeeper and producer of the Official Watch of the International Fencing Federation (FIE) and the Fencing World Championships. The partnership between the FIE and Tissot dates back to 1996 and continues to the present day.

FIBA, the International Basketball Federation and Tissot have extended their global partnership for the 2013-2016 period. Tissot’s initial co-operation with FIBA started in 2008 and has since added French star Tony Parker as one of its main brand ambassadors.

Tissot is Official Timekeeper and Sponsor of the FIM Superbike World Championship. Tissot’s long-term commitment to the FIM Superbike World Championship is a considerable extension of its existing sponsorship portfolio and acknowledges the strong international scope and fan appeal of the leading road racing series for production-based motorcycles. Tissot's first appearance was at Superbike round in Assen, Netherlands 15–17 April 2011.

Tissot has been the Official Timekeeper of MotoGP since 2001.

In 2006 Tissot was appointed the role of the official timekeeper of NASCAR and Official Watch of NASCAR. Tissot introduced an entire collection of watches aptly named "NASCAR". These watches embody NASCAR with their sporty dials and bold colors.

Tissot was Official Timekeeper of the 17th Asian Games Incheon, which was held from September 19 to the October 4, 2014, in and around Incheon Metropolitan City in the Republic of Korea. Tissot has already been the Official Timekeeper of the Asian Games in 1998, 2002 as well as 2006. For Tissot, it is a perfect platform for demonstrating its dedication to precision in action.

Tissot is the Official Timekeeper and Official Watch for the Australian Football League (AFL). Tissot may be relatively new to this exciting sport, but the AFL is an established league and wildly popular in Australia, with the largest average attendance, greatest exposure on TV and biggest sponsors.

Tissot has partnered with the Chinese Basketball Association (CBA) as the Official Timekeeper and Official Watch. 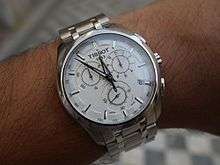 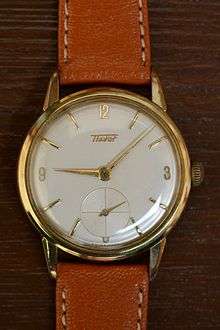 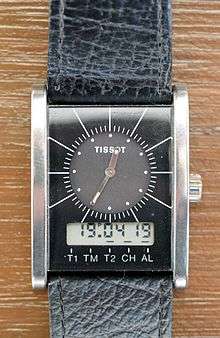 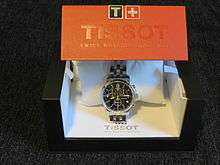