The Toda people are a small pastoral tribal community who live on the isolated Nilgiri plateau in hill country of Southern India. Before the 18th century and British colonisation, the Toda coexisted locally with other ethnic communities, including the Kota, and Kuruba, in a loose caste-like society, in which the Toda were the top ranking.[1] During the 20th century, the Toda population has hovered in the range 700 to 900.[1] Although an insignificant fraction of the large population of India, since the late 18th century the Toda have attracted "a most disproportionate amount of attention because of their ethnological aberrancy"[1] and "their unlikeness to their neighbours in appearance, manners, and customs."[1] The study of their culture by anthropologists and linguists proved significant in developing the fields of social anthropology and ethnomusicology.

The Toda traditionally live in settlements called mund, consisting of three to seven small thatched houses, constructed in the shape of half-barrels and located across the slopes of the pasture, on which they keep domestic buffalo.[2] Their economy was pastoral, based on the buffalo, which dairy products they traded with neighbouring peoples of the Nilgiri Hills.[2] Toda religion features the sacred buffalo; consequently, rituals are performed for all dairy activities as well as for the ordination of dairymen-priests. The religious and funerary rites provide the social context in which complex poetic songs about the cult of the buffalo are composed and chanted.[2]

Fraternal polyandry in traditional Toda society was fairly common; however, this practice has now largely been abandoned as was female infanticide. During the last quarter of the 20th century, some Toda pasture land was lost due to outsiders using it for agriculture[2] or afforestation by the State Government of Tamil Nadu. This has threatened to undermine Toda culture by greatly diminishing the buffalo herds. Since the early 21st century, Toda society and culture have been the focus of an international effort at culturally sensitive environmental restoration.[3] The Toda lands are now a part of The Nilgiri Biosphere Reserve, a UNESCO-designated International Biosphere Reserve; their territory is declared UNESCO World Heritage Site.[4] 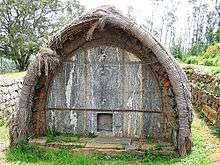 "justif[y] [sic] concluding that a figure between 700 and 800 is likely to be near the norm, and that variation in either direction is due on the one hand to epidemic disaster and slow recovery thereafter (1921 (640), 1931 (597), 1941 (630)) or on the other hand to an excess of double enumeration (suggested already by census officers for 1901 and 1911, and possibly for 1951). Another factor in the uncertainty in the figures is the declared or undeclared inclusion or exclusion of Christian Todas by the various enumerators ... Giving a figure between 700 and 800 is highly impressionistic, and may for the immediate present and future be pessimistic, since public health efforts applied to the community seem to be resulting in an increased birth rate and consequently, one would expect, in an increased population figure. However, earlier predictions that the community was declining were overly pessimistic and probably never well-founded."[1]

DNA studies in the early 21st century showed that the Toda and Kota share genes which distinguish them from the other Nilgiri Hill Tribes.[5] 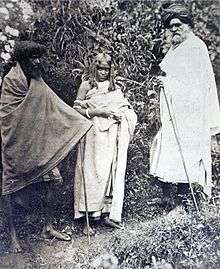 Photograph of two Toda men and a woman. Nilgiri Hills, 1871.

The Toda are most closely related to the Kota both ethnically and linguistically.

The Toda dress consists of a single piece of cloth, which is worn like shalya wrap over a dhoti for men and as a skirt for women along with shalya wrap. The symbols from traditional costumes are very old and similar to those worn in ancient India, according to surviving representations.

Their sole occupation is cattle-herding and dairy-work. Holy dairies are built to store the buffalo milk.

They once practised fraternal polyandry, a practice in which a woman marries all the brothers of a family, but no longer do so.[6][7] All the children of such marriages were deemed to descend from the eldest brother. The ratio of females to males is about three to five. The culture historically practised female infanticide. In the Toda tribe, families arrange contracted child marriage for couples. 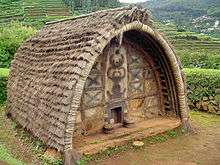 The hut of a Toda Tribe of Nilgiris, India. Note the decoration of the front wall, and the very small door.

The Todas live in small hamlets called munds. The Toda huts, called dogles, are of an oval, pent-shaped construction. They are usually 10 feet (3 m) high, 18 feet (5.5 m) long and 9 feet (2.7 m) wide. They are built of bamboo fastened with rattan and are thatched. Thicker bamboo canes are arched to give the hut its basic pent shape. Thinner bamboo canes (rattan) are tied close and parallel to each other over this frame. Dried grass is stacked over this as thatch. Each hut is enclosed within a wall of loose stones.

The front and back of the hut are usually made of dressed stones (mostly granite). The hut has a tiny entrance at the front – about 3 feet (90 cm) wide, 3 feet (90 cm) tall, through which people must crawl to enter the interior. This unusually small entrance is a means of protection from wild animals. The front portion of the hut is decorated with the Toda art forms, a kind of rock mural painting.

The Todas are vegetarians and do not eat meat, eggs that can hatch, or fish (although some villagers do eat fish). The buffalo were milked in a holy dairy, where the priest/milkman also processed their gifts. Buffalo milk is used in a variety of forms: butter, butter milk, yogurt, cheese and drunk plain. Rice is a staple, eaten with dairy products and curries. 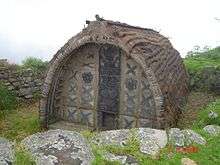 A Toda temple in Muthunadu Mund near Ooty, India. 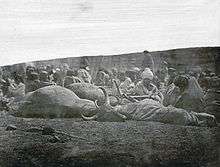 The Toda religion exalted high-class men as holy milkmen, giving them sacred status as priests of the holy dairy. According to Frazer in 1922 (see quote below from Golden Bough, the holy milkman was prohibited from walking across bridges while in office. He had to ford rivers by foot, or by swimming. The people are prohibited from wearing shoes or any type of foot covering.

Toda temples are constructed in a circular pit lined with stones. They are similar in appearance and construction to Toda huts. Women are not allowed to enter or go close to these huts that are designated as temples.

"Among the Todas of Southern India the holy milkman, who acts as priest of the sacred dairy, is subject to a variety of irksome and burdensome restrictions during the whole time of his incumbency, which may last many years. Thus he must live at the sacred dairy and may never visit his home or any ordinary village. He must be celibate; if he is married he must leave his wife. On no account may any ordinary person touch the holy milkman or the holy dairy; such a touch would so defile his holiness that he would forfeit his office. It is only on two days a week, namely Mondays and Thursdays, that a mere layman may even approach the milkman; on other days if he has any business with him, he must stand at a distance (some say a quarter of a mile) and shout his message across the intervening space. Further, the holy milkman never cuts his hair or pares his nails so long as he holds office; he never crosses a river by a bridge, but wades through a ford and only certain fords; if a death occurs in his clan, he may not attend any of the funeral ceremonies, unless he first resigns his office and descends from the exalted rank of milkman to that of a mere common mortal. Indeed it appears that in old days he had to resign the seals, or rather the pails, of office whenever any member of his clan departed this life. However, these heavy restraints are laid in their entirety only on milkmen of the very highest class".

The Toda language is a member of the Dravidian family. The language is typologically aberrant and phonologically difficult. Linguists have classified Toda (along with its neighbour Kota) as a member of the southern subgroup of the historical family proto-South-Dravidian. It split off from South Dravidian, after Kannada and Telugu, but before Malayalam. In modern linguistic terms, the aberration of Toda results from a disproportionately high number of syntactic and morphological rules, of both early and recent derivation, which are not found in the other South Dravidian languages (save Kota, to a small extent.)[1]

The forced interaction with other peoples with technology has caused a lot of changes in the lifestyle of the Toda. They used to be primarily a pastoral people but are now increasingly venturing into agriculture and other occupations. They used to be strict vegetarians but some now eat non-vegetarian food.

Although many Toda abandoned their traditional distinctive huts for houses made of concrete,[6] in the early 21st century, a movement developed to build the traditional barrel-vaulted huts. From 1995 to 2005, forty new huts were built in this style, and many Toda sacred dairies were renovated. Each has a narrow stone pit around it and the tiny door is held shut with a heavy stone. Only the priest may enter it. It is used for storage of the sacred of buffalo milk.[8]

Registrar of Geographical Indication gave GI status for this unique embroidery, a practice which has been passed on to generations. The status ensures uniform pricing for Toda embroidery products and provides protection against low-quality duplication of the art.[9]