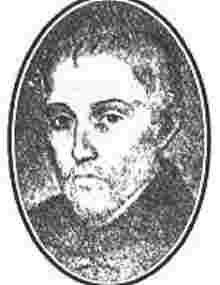 Tomás Luis de Victoria (sometimes Italianised as da Vittoria; c. 1548 – 27 August 1611) was the most famous composer in 16th-century Spain, and was one of the most important composers of the Counter-Reformation, along with Giovanni Pierluigi da Palestrina and Orlando di Lasso. Victoria was not only a composer, but also an accomplished organist and singer as well as a Catholic priest. However, he preferred the life of a composer to that of a performer.[1]

Victoria was born in Sanchidrián in the province of Ávila, Castile around 1548 and died in 1611.[2] Victoria's family can be traced back for generations. Not only are the names of the members in his immediate family known, but even the occupation of his grandfather.[3] Victoria was the seventh of nine children born to Francisco Luis de Victoria and Francisca Suárez de la Concha. His mother was of converso descent.[4] After his father's death in 1557, his uncle, Juan Luis, became his guardian. He was a choirboy in Ávila Cathedral. Cathedral records state that his uncle, Juan Luis, presented Victoria's Liber Primus to the Church while reminding them that Victoria had been brought up in the Ávila Cathedral.[5] Because he was such an accomplished organist, many believe that he began studying the keyboard at an early age from a teacher in Ávila.[6] Victoria most likely began studying "the classics" at St. Giles's, a boys' school in Ávila. This school was praised by St.Teresa of Avila and other highly regarded people of music.[7]

After receiving a grant from Philip II in 1565, Victoria went to Rome and became cantor at the German College founded by St. Ignatius Loyola.[8] He may have studied with Palestrina around this time, though the evidence is circumstantial; certainly he was influenced by the Italian's style. For some time, beginning in 1573, Victoria held two positions, one being at the German College and the other being at the Pontifical Roman Seminary. He held the positions of chapelmaster and instructor of plainsong. In 1571, he was hired at the German College as a teacher and began earning his first steady income.[9] After Palestrina left the Seminary, Victoria took over the position of maestro.[10] Victoria was ordained a priest in 1574 by bishop Thomas Goldwell. Before this he was made a deacon, but did not serve long in that capacity as typically deacons became priests soon after.[11] In 1575, Victoria was appointed Maestro di Capella at S. Apollinare.[12] Church officials would often ask Victoria for his opinion on appointments to cathedral positions because of his fame and knowledge.[13] He was faithful to his position as convent organist even after his professional debut as an organist.[14] He did not stay in Italy, however.

In 1587 Philip II honoured his desire to return to his native Spain, naming him chaplain to his sister, the Dowager Empress María, daughter of Charles V, who had been living in retirement with her daughter Princess Margarita at the Monasterio de las Descalzas de S Clara at Madrid from 1581. In 1591, Victoria became a godfather to his brother Juan Luis's daughter, Isabel de Victoria.[15] Victoria worked for 24 years at Descalzas Reales, serving for 17 years as chaplain to the Empress until her death, and then as convent organist. Victoria was also being paid much more at the Descalzas Reales than he would have earned as a cathedral chapelmaster, receiving an annual income from absentee benefices from 1587–1611. When the Empress Maria died in 1603, she willed three chaplaincies in the convent, with one going to Victoria. According to Victoria, he never accepted any extra pay for being a chapelmaster, and became the organist rather than the chapelmaster.[16] Such was the esteem in which he was held that his contract allowed him frequent travel away from the convent. He was able to visit Rome in 1593 for two years, attending Palestrina's funeral in 1594. He died in 1611 in the chaplain's residence and was buried at the convent, although his tomb has yet to be identified.

Victoria is the most significant composer of the Counter-Reformation in Spain, and one of the best-regarded composers of sacred music in the late Renaissance, a genre to which he devoted himself exclusively. Victoria's music reflected his intricate personality,[17] and expressed the passion of Spanish mysticism and religion.[10] Victoria was praised by Padre Martini for his melodic phrases and his joyful inventions.[18] His works have undergone a revival in the 20th century, with numerous recent recordings. Many commentators hear in his music a mystical intensity and direct emotional appeal, qualities considered by some to be lacking in the arguably more rhythmically and harmonically placid music of Palestrina. There are quite a few differences in their compositional styles, such as treatment of melody and quarter-note dissonances.[19]

Victoria was a master at overlapping and dividing choirs with multiple parts with a gradual decreasing of rhythmic distance throughout. Not only does Victoria incorporate intricate parts for the voices, but the organ is almost treated like a soloist in many of his choral pieces.[20] Victoria did not begin the development of psalm settings or antiphons for two choirs, but he continued and increased the popularity of such repertoire.[21] Victoria reissued works that had been published previously, and included new revisions in each new issue.[2]

Victoria published his first book of motets in 1572.[22] In 1585 he wrote his Officium Hebdomadae Sanctae, a collection which included 37 pieces that are part of the Holy Week celebrations in the Catholic liturgy, including the eighteen motets of the Tenebrae Responsories.[23]

Two influences in Victoria's life were Giovanni Maria Nanino and Luca Marenzio, whom Victoria admired for their work in madrigals rather than church music.[24] It has been speculated that Victoria took lessons from Escobedo at an early age before moving to Rome.[12]

Victoria claimed that he composed his most creative works under his patron Otto, Cardinal von Truchsess. However, Stevenson does not believe that he learned everything about music under Cardinal Truchsess's patronage; Victoria would like people to believe such a fact.[22] During the years that Victoria was devoted to Philip II of Spain, he expressed exhaustion from his compositional work. Most of the compositions that Victoria wrote that were dedicated to Cardinal Michele Bonelli, Philip II of Spain, or Pope Gregory XIII were not compensated properly.[23]

Stylistically, his music shuns the elaborate counterpoint of many of his contemporaries, preferring simple line and homophonic textures, yet seeking rhythmic variety and sometimes including intense and surprising contrasts. His melodic writing and use of dissonance is more free than that of Palestrina; occasionally he uses intervals which are prohibited in the strict application of 16th century counterpoint, such as ascending major sixths, or even occasional diminished fourths (for example, a melodic diminished fourth occurs in a passage representing grief in his motet Sancta Maria, succurre). Victoria sometimes uses dramatic word-painting, of a kind usually found only in madrigals. Some of his sacred music uses instruments (a practice which is not uncommon in Spanish sacred music of the 16th century), and he also wrote polychoral works for more than one spatially separated group of singers, in the style of the composers of the Venetian school who were working at St. Mark's in Venice.

His most famous work, and his masterpiece, Officium Defunctorum, is a Requiem Mass for the Empress Maria.[10]

The following are recordings of music by Tomás Luis de Victoria. As in all of his music, the texts are in Latin and drawn from the Roman Catholic Liturgy.