His Majesty's Armed Forces (HMAF) is the military of Tonga. It is composed of three operational components and two support elements (logistics and training groups).

The mission of HMAF is to: Defend the sovereignty of the Kingdom of Tonga.

In recent years, members of HMAF have supported Coalition of the Willing in Operation Iraqi Freedom, the International Security Assistance Force in Afghanistan, and the Regional Assistance Mission to the Solomon Islands.

His Majesty's Armed Forces are organized in a unified command system. It consists of three forces; the Regular Force, the Territorial Force, and the Active Reserve Force.

The main elements of HMAF are:[1]

The Maritime Force is equipped with three Pacific-class patrol boats, a tanker, a Landing Craft Mechanized and a motor boat that is the royal yacht.[2] Tongan Maritime Force performs patrol missions, occasionally dealing with border violations. Notably at the Minerva Reef and Tonga’s restricted fishing zones.[3]

The Royal Tongan Marine Infantry is organized as a single Battalion size group with a HQ and 3 Light Infantry Companies. The Royal Tongan Guard is a company size unit that is responsible for the security of His Majesty

The Air Wing was established in 1996 and operates one Beechcraft G.18S aircraft in the maritime patrol and search and rescue roles, and an American Champion Citabria light trainer.[4]

The HMAF is a member of the following international defense organisations:

Tonga has an agreement to share "disaster response knowledge" with the United States Nevada National Guard.[5] 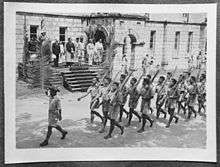 TDF during the Italian capitulation parade.

Tonga participated in World War I, as part of the New Zealand Expeditionary Force.

The Tonga Defense Service (TDS) came into existence at the beginning of World War II in 1939.In 1943 New Zealand helped train two Tongan contingents of about 2000 troops, who saw action in the Solomon Islands.[3] In addition, New Zealand and US troops were stationed on Tongatapu, which became a staging point for shipping.

Former Prime Minister Prince Lavaka Ata 'Ulukalala (now King Tupou VI) joined the naval arm of the Tonga Defense Service in 1982 and became Lieutenant-Commander of the defense force in 1987. From 1990 to 1995 he commanded the PPB VOEA Pangai and his time in charge included peacekeeping operations in Bougainville.

In March 2003 Military to Military talks began between Tonga and the United States about Tonga providing troops for the Multinational force in Iraq. Support arrangements were finalized in May 2004. 45 Royal Tongan Marines led by the Chief of Defense of the Tonga Defense Services, Colonel Tau'aika 'Uta'atu, departed Tonga on 13 June 2004. From July 2004, the Royal Tonga Marines were augmenting the 1st Marine Expeditionary Forces (MEF) in the Al Anbar Province of Iraq. The Royal Marines supported the 1st Marine Division's security and stabilization mission at Camp Blue Diamond. Tonga first served with the 1st MEF on the Solomon Island during World War II. The Royal Tongan Marines returned from Iraq in December 2004. 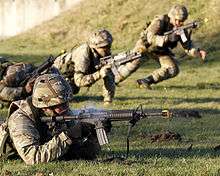 Tongan troops training in England with the Royal Air Force Regiment in 2010.

In 2006, TDS soldiers, in cooperation with local police, were deployed to deal with the Nuku'alofa riots.[3]

In December 2008, the Tonga Defence Services ended their mission in the Iraq War and returned home.[6]

In 2010, Tongan troops began training with the RAF Regiment, in preparation for operations in Afghanistan; the first troops deployed to Afghanistan during February 2011.[7]

Tonga's military size is approximately 450 troops, half of which were sent to fight in the War in Afghanistan.Serving in Camp Bastion and Camp Leatherneck.[8][9]

During the September 2012 Camp Bastion raid Tonga troops were in perimeter guard towers without any night vision devices.[10]

Tranche 7 was the seventh and final rotational contingent of Royal Tongan Marines to Afghanistan.

Equipment of the Tongan Defence Service