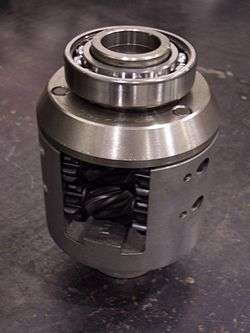 Torsen differential from an Audi quattro

It was invented by American Vernon Gleasman[1] and manufactured by the Gleason Corporation. Torsen is a contraction of Torque-Sensing. TORSEN and TORSEN Traction are registered trademarks of JTEKT Torsen North America Inc (formerly Zexel Corporation, formerly Gleason Power Systems). All Torsen differentials have their origin in the Dual-Drive Differential that was invented and patented by Gleasman in 1958.

Torsen differentials can be used in one or more positions on a motor vehicle:

A four-wheel-drive vehicle, for example, may use either one, two, or three Torsen differentials.

As of 2008, there are three types of Torsen differentials.

The Torsen T-3 is currently employed as the centre differential in all non-Haldex Traction Audi models with a ZF-sourced automatic transmission Quattro four-wheel drive, such as: Audi A6, Audi A7, and Audi Q7. Audi uses a mechanical "Crown Wheel" centre differential for all longitudinal implementations using dual-clutch transmissions, such as the 2013/14 S4/RS4. Alfa Romeo used a Torsen C twin differential in the Alfa Romeo 156 Crosswagon Q4 and also in the 159, Alfa Romeo Brera and Spider Q4 models. Also, Toyota uses a Torsen T-3 in the center differential of the 4Runner Limited, FJ Cruiser 6-speed manual, Land Cruiser and Lexus GX470, with manual locking feature, and General Motors used a Torsen T-3 center differential in the transfer case of the Chevrolet TrailBlazer SS and Saab 9-7X (Aero model only).

The TBR should not be confused with the uneven torque-split feature in the planetary-type Torsen III. The planetary gearset allows a Torsen III center differential to distribute torque unevenly between front and rear axles during normal (full traction) operation without inducing wind-up in the drivetrain. This feature is independent of the Torque Bias Ratio.

Torsens in front and/or rear axles

When a Torsen differential is employed, the slower-moving wheel always receives more torque than the faster-moving wheel. The Torsen T-2R RaceMaster is the only Torsen to have a preload clutch. So, even if a wheel is airborne, torque is applied to the other side. If one wheel were raised in the air, the regular Torsen units would act like an open differential, and no torque would be transferred to the other wheel. This is where the parking brake "trick" can help out. If the parking brake is applied, assuming that the parking brake applies even resistance to each side, then the drag to the airborne side is "multiplied" through the differential, and TBR times the drag torque is applied to the other side. So, the ground side would see (TBR X drag torque) minus drag torque, and that may restore motion either forward or in reverse. In Hummer/HMMWV applications, there are both front and rear Torsen differentials, so the use of the main brakes will operate this "trick" on both axles simultaneously.

Torsen differentials are used in many of the various Audi Quattro models, excluding the A3 and S3 and TT, which have transverse-mounted engines and use Haldex Traction 4WD systems.

It is also used in the third- and fourth-generation Toyota Supra (Optional) and third-generation Toyota Soarer, the B5 platform revision of the Volkswagen Passat 4motion (based upon the Audi A4), Mazda MX-5/Miata 1994 to 1995 have a Torsen Type I and late 1995 to 2002 models have a Torsen Type II, the 2002-2003 model year of the Nissan Maxima SE 6 speed manual, the Honda S2000, and 1999-2002 s15 Nissan Silvia spec r. The Lancia Delta Integrale, the Peugeot 405 T16, as well as the 1999-2002 model Pontiac Firebird and Chevrolet Camaro, had a Torsen differential. Rover group fitted Torsen type 1, and later type 2, units to their range of high performance front wheel drive turbo models (220, 420, 620ti, and 800 Vitesse). The use of the Torsen differential was preferred by Rover group; it is much better at controlling wheel spin on front wheel drive vehicles than electronic systems, which only reduce engine power and therefore performance.

Other users of the Torsen limited-slip differential include the Toyota 86 and the Subaru BRZ, both released in 2012.