Toyota Industries Corporation (株式会社豊田自動織機, Kabushiki-gaisha Toyota Jidō Shokki) is a Japanese machine maker. Originally a manufacturer of automatic looms, it is the company from which Toyota Motor Corporation developed. It is the world's largest manufacturer of forklift trucks measured by revenues.[1]

The company was founded in 1926 as Toyoda Automatic Loom Works, Ltd. by Sakichi Toyoda, the inventor of a series of manual and machine-powered looms. The most impressive of these was the 1924 Toyoda Automatic Loom, Type G, a completely automatic high-speed loom featuring the ability to change shuttles without stopping and dozens of other innovations. At the time it was the world's most advanced loom, delivering a dramatic improvement in quality and a twenty-fold increase in productivity.[2] In 2007, this machine was registered as item No. 16 in the Mechanical Engineering Heritage of Japan as "a landmark achievement that advanced the global textile industry and laid the foundation for the development of the Toyota Group."[2]

In 1933, the company established its automobile department, led by Kiichiro Toyoda, the eldest son of Sakichi Toyoda. This department was spun off as Toyota Motor Co., Ltd. in 1937 and is now known as Toyota Motor Corporation. Toyota Industries is one of 13 core companies of the Toyota Group. The company owns 5.55% of Toyota Motor and is the largest shareholder (excluding trust revolving funds). As a countermeasure against hostile merger and acquisition attempts, Toyota Motor currently holds 23.5% of common stock of its parent company Toyota Industries. 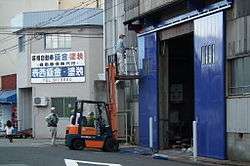 Toyota Industries Corporation is under contract from Toyota Motor Corporation for the production of the Toyota Vitz/Yaris and the Toyota RAV4. The company manufactures automotive engines for use in Toyota-brand automobiles such as Avensis, Corolla, Crown, and Land Cruiser.

In October 2012, Toyota Industries acquired Cascade Corp., a maker of parts for the lift trucks industry, for a price of $728 million.[6]

The company's shares are traded on the Tokyo Stock Exchange under symbol 6201.T.