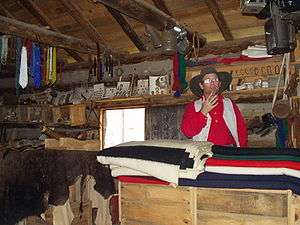 A recreation of a typical trading post for trade with the Plains Indians.

A trading post or trading station was a place or establishment where the trading of goods took place; the term is generally used, in modern parlance, in reference to such establishments in historic Northern America, although the practice long predates that continent's colonization by Europeans. The preferred travel route to a trading post or between trading posts, was known as a trade route.

The annexation of trading posts along ancient trade routes took place in the 16th and 17th century by European powers like the Dutch and English. It began with the capture of Ceuta (a terminus of the trans-Saharan trade route) by the Portuguese in 1415. They went on to establish further enclaves as they explored the coasts of Africa, Arabia, India and South East Asia in search of the source of the lucrative spice trade. Trading posts were also very common in the early settlements of Canada and the United States for the trade of such things as fur. They were also used in many camps across the United States as places to buy snacks, items and souvenirs.

The Hudson's Bay Company set up trading posts around Hudson Bay during the fur trade. Goods were traded for beaver pelts amongst the Europeans and the Native Americans. In the United States in the early 19th century, trading posts used by Native Americans were licensed by the federal government and called "factories". Tribes were to concede substantial territory to the United States in order to access the "factories" as happened at Fort Clark in the Treaty of Fort Clark in which the Osage Nation conceded most of Missouri in order to access the trading post.