For the ship, see Treasurer (warship). 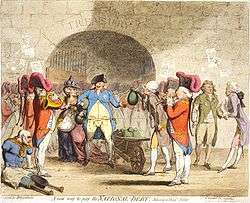 In A new way to pay the National Debt (1786), James Gillray caricatured Queen Charlotte and King George III awash with treasury funds to cover royal debts, with Pitt handing them another moneybag.

The Treasury of a country is the department responsible for the country's economy, finance and revenue. The Treasurer is generally the head of the Treasury, although, in some countries (such as the U.K. or the U.S.) the treasurer reports to a Secretary of the Treasury, or Chancellor of the Exchequer. In Australia, the Treasurer is a senior Minister and usually the second most important member of the Government after the Prime Minister. From 1867 to 1993, the Ministry of Finance (Ontario) was called the Treasurer of Ontario. In countries like India Treasurer is called as 'Treasury'.

Originally the word referred to the person in charge of the treasure of a noble; however, it has now moved into wider use. In the UK during the 17th Century, a position of Lord High Treasurer was used on several occasions as the third great officer of the Crown. Now the title First Lord of the Treasury is the official title of the British Prime Minister.

In corporations, the Treasurer is the head of the corporate treasury department. They are typically responsible for liquidity risk management, cash management, issuing debt, foreign exchange and interest rate risk hedging, securitization, oversight of pension investment management, and capital structure (including share issuance and repurchase). They also typically advise the corporation on matters relating to corporate finance. They could also have oversight of other areas, such as the purchase of insurance.

There are various Treasurer associations. The International Group of Treasury Associations (www.igta.org) is composed of about 30 treasurer's organizations in the world. In Europe, the European Associations of Corporate Treasurers (www.eact-group.com) federates 17 national treasurers associations from 16 countries. The Certified Treasury Professional designation serves as the professional certification for treasury managers and corporate treasurers with over 20,000 CTP's worldwide.

In UK and other Commonwealth (or former) countries, they have their own ACT qualification and its variations based on individual countries. It is a UK Chartered institute and offers various certifications and diplomas. Membership could be obtained through general route or Fast Track route. The latter offers to members of UK CCAB institutes plus CIMA. The qualification is portal through Commonwealth countries and therefore global.

In the Inns of Court

In the Inns of Court, the professional associations for barristers in England and Wales, the bencher or Master of the bench who heads the Inn for that year holds the title 'Master Treasurer'. This title is similarly used by other legal associations sharing a British heritage, such as the Law Society of Upper Canada.

Many volunteer organizations, particularly not-for-profit organizations such as charities and theaters, appoint treasurers who are responsible for conservation of the treasury, whether this be through pricing of a product, organizing sponsorship, or arranging fundraising events.

The treasurer would also be part of the group which would oversee how the money is spent, either directly dictating expenditure or authorizing it as required. It is their responsibility to ensure that the organization has enough money to carry out their stated aims and objectives, and that they do not overspend, or under spend. They also report to the board meetings and/or to the general membership the financial status of the organization to ensure checks and balances.[1] Accurate records and supporting documentation must be kept to a reasonable level of detail that provides a clear audit trail for all transactions.[2]