For other uses, see Trident (disambiguation). 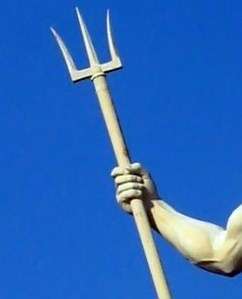 A trident /ˈtraɪdənt/ is a three-pronged spear. It is used for spear fishing and historically as a polearm. The trident is the weapon of Poseidon, or Neptune, the god of the sea in classical mythology. In Hindu mythology it is the weapon of Shiva, known as trishula (Sanskrit for "triple-spear").

The word "trident" comes from the French word trident, which in turn comes from the Latin word tridens or tridentis: tri "three" and dentes "teeth". Sanskrit trishula is compound of tri त्रि "three"+ ṣūla शूल "thorn". 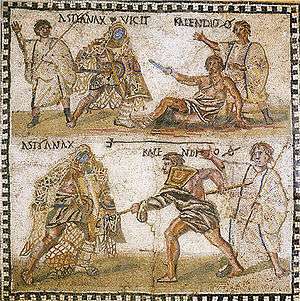 Mosaic, 4th century BC, showing a retiarius or "net fighter", with a trident and cast net, fighting a secutor. 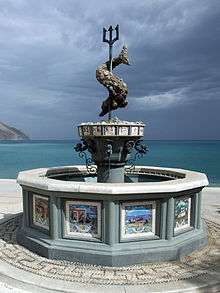 In Greek, Roman, and Hindu mythology, the trident is said to have the power of control over the ocean.

Tridents for fishing usually have barbed tines which trap the speared fish firmly. In the Southern and Midwestern United States, gigging is used for harvesting suckers, bullfrogs, flounder, and many species of rough fish.[1]

The trident, known as dangpa, is featured as a weapon in the 17th- to 18th-century systems of Korean martial arts.

In Ancient Rome, in a parody of fishing, tridents were famously used by a type of gladiator called a retiarius or "net fighter". The retiarius was traditionally pitted against a secutor, and cast a net to wrap his adversary and then used the trident to kill him.[2]

In Hindu legends and stories Shiva, a Hindu God who holds a trident in his hand, uses this sacred weapon to fight off negativity in the form of evil villains. The trident is also said to represent three gunas mentioned in Indian vedic philosophy namely sāttvika, rājasika and tāmasika.

In Greek myth, Poseidon used his trident to create water sources in Greece and the horse. Poseidon, as well as being god of the sea, was also known as the "Earth Shaker" because when he struck the earth in anger he caused mighty earthquakes and he used his trident to stir up tidal waves, tsunamis and sea storms. Parallel to its fishing origins, the trident is associated with Poseidon, the god of the sea in Greek mythology, the Roman god Neptune.

In Roman myth, Neptune also used a trident to create new bodies of water and cause earthquakes. A good example can be seen in Gian Bernini's Neptune and Triton.

In religious Taoism, the trident represents the Taoist Trinity, the Three Pure Ones. In Taoist rituals, a trident bell is used to invite the presence of deities and summon spirits, as the trident signifies the highest authority of Heaven.

The trishula of the Hindu god Shiva. A weapon of South-East Asian (particularly Thai) depiction of Hanuman, a character of Ramayana.

A fork Jewish priests (Kohanim) used to take their portions of offerings.[3]

The glyph or sigil of the planet Neptune in astronomy and astrology.

A number of structures in the biological world are described as trident in appearance. Since at least the late 19th century the trident shape was applied to certain botanical shapes; for example, certain orchid flora were described as having trident-tipped lips in early botanical works.[4] Furthermore, in current botanical literature, certain bracts are stated to have a trident-shape (e.g. Douglas-fir).[5]