In classical mechanics, the two-body problem is to determine the motion of two point particles that interact only with each other. Common examples include a satellite orbiting a planet, a planet orbiting a star, two stars orbiting each other (a binary star), and a classical electron orbiting an atomic nucleus (although to solve the electron/nucleus 2-body system correctly a quantum mechanical approach must be used). 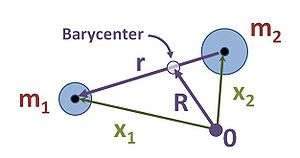 When applied to the two masses, Newton's second law states that

Adding and subtracting these two equations decouples them into two one-body problems, which can be solved independently. Adding equations (1) and (2) results in an equation describing the center of mass (barycenter) motion. By contrast, subtracting equation (2) from equation (1) results in an equation that describes how the vector r = x1 − x2 between the masses changes with time. The solutions of these independent one-body problems can be combined to obtain the solutions for the trajectories x1(t) and x2(t).

Addition of the force equations (1) and (2) yields

is the position of the center of mass (barycenter) of the system.

The motion of two bodies with respect to each other always lies in a plane (in the center of mass frame). Defining the linear momentum p and the angular momentum L by the equations (where μ is the reduced mass)

and using the property of the vector cross product that v × w = 0 for any vectors v and w pointing in the same direction,

Introducing the assumption (true of most physical forces, as they obey Newton's strong third law of motion) that the force between two particles acts along the line between their positions, it follows that r × F =  0 and the angular momentum vector L is constant (conserved). Therefore, the displacement vector r and its velocity v are always in the plane perpendicular to the constant vector L.

Energy of the two-body system

If the force F(r) is conservative then the system has a potential energy U(r), so the total energy can be written as

The coordinates x1 and x2 can be expressed as

and in a similar way the energy E is related to the energies E1 and E2 that separately contain the kinetic energy of each body:

For many physical problems, the force F(r) is a central force, i.e., it is of the form

where F(r) is negative in the case of an attractive force.

The total work done in a given time interval by the forces exerted by two bodies on each other is the same as the work done by one force applied to the total relative displacement.