For other ships with the same name, see USS Kearsarge.

USS Kearsarge, a Mohican-class sloop-of-war, is best known for her defeat of the Confederate commerce raider CSS Alabama during the American Civil War. The Kearsarge was the only ship of the United States Navy named for Mount Kearsarge in New Hampshire. Subsequent ships were later named Kearsarge in honor of the ship.[1]

Kearsarge was built at Portsmouth Navy Yard in Kittery, Maine, under the 1861 American Civil War emergency shipbuilding program. The new 1,550 long tons (1,570 t) steam sloop-of-war was launched on 11 September 1861; she was sponsored by "Mrs. McFarland," the wife of the editor of the Concord Statement, and was commissioned on 24 January 1862, with Captain Charles W. Pickering in command. Soon after, she was hunting for Confederate raiders in European waters.

Kearsarge departed Portsmouth on 5 February 1862 for the coast of Spain. She then sailed to Gibraltar to join the blockade of Confederate raider CSS Sumter, forcing the ship's abandonment there in December of 1862. However, Sumter's commanding Captain, Raphael Semmes, having returned to England for reassignment, was soon recommissioning off the Azores, in international waters, the newly built British sloop Enrica as CSS Alabama. From there, Alabama went on to become the most successful commerce raider in naval history.

From Cádiz in November of 1862 until March 1863 Kearsarge prepared for her engagement with Alabama; she searched for the raider ranging along the coast of Northern Europe all the way to the Canaries, Madeira, and the Outer Hebrides. The following year, on 14 June 1864, Kearsarge arrived at Cherbourg and found Alabama in port; the raider had returned there for much needed repairs after a very long, multiple ocean cruise at the expense of 65 Union merchant ships. Kearsarge took up station at the harbor's entrance to await Semmes' next move.

On 19 June, Alabama stood out of Cherbourg Harbor for her last action. Mindful of French neutrality, Kearsarge's new commanding officer, Capt. John A. Winslow, took the sloop-of-war clear of territorial waters, then turned to meet the Confederate cruiser. 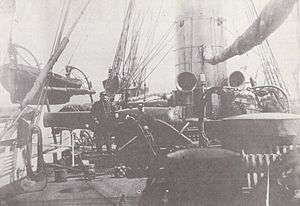 The deck of Kearsarge after her engagement with CSS Alabama.

Alabama was the first to open fire, while Kearsarge held her reply until she had closed to less than 1,000 yd (0.91 km). Steaming on opposite courses, the ships moved in seven spiraling circles on a southwesterly course, as each commander tried to cross his opponent's bow to deliver deadly raking fire. The battle quickly turned against Alabama due to her poor gunnery and the quality of her long-stored and deteriorated powder, fuses, and shells. Unknown at the time to Captain Semmes aboard the Confederate raider, Kearsarge had been given added protection for her vital machinery by chain cable mounted in three separate, vertical tiers along her port and starboard midsection.

This hull armor had been installed in just three days, more than a year before, while Kearsarge was in port at the Azores. It was made using 720 ft (220 m) of 1.7 in (43 mm) single-link iron chain and covered hull spaces 49 ft 6 in (15.09 m) long by 6 ft 2 in (1.88 m) deep. It was stopped up and down in three layers to eye-bolts with marlines and secured by iron dogs. This was then concealed behind 1 in (25 mm) deal-boards painted black to match the upper hull's color. This chain cladding was placed along Kearsarge's port and starboard midsection down to her waterline, for the purpose of protecting her engines and boilers when the upper portion of the cruiser's coal bunkers were empty. This armor belt was hit twice during the fight: First in the starboard gangway by one of Alabama's 32-pounder shells which cut the chain armor, denting the hull planking underneath, then again by a second 32-pounder shell that exploded and broke a link of the chain, tearing away a portion of the deal-board covering. Even if the shells had been delivered by Alabama's more powerful 100-pounder Blakely pivot rifle, the impacts were more than 5 ft (1.5 m) above the waterline and would therefore have missed her vital machinery.

One hour after she fired her first salvo, Alabama was reduced to a sinking wreck by Kearsarge's more accurate gunnery and its powerful 11 in (280 mm) Dahlgren smoothbore pivot cannons. Alabama went down by the stern shortly after Semmes struck his colors, threw his sword into the sea to avoid capture, and sent one of his two remaining longboats to Kearsarge with a message of surrender and a rescue appeal for his surviving crew. Kearsarge finally sent ship's boats for the majority of Alabama's survivors, but Semmes and 41 others were rescued instead by the nearby British yacht Deerhound and escaped to the United Kingdom.

"The Battle of the Kearsarge and the Alabama" by Édouard Manet

The battle between Kearsarge and Alabama is honored by the United States Navy by a battle star on the Civil War campaign streamer. In addition, 17 of Kearsarge's crew received the Medal of Honor for valor during this action: 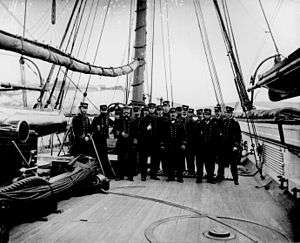 A photo of naval officers on board Kearsarge, including Captain John A. Winslow (foreground, third from the left), shortly after the sinking of the CSS Alabama.

Kearsarge then sailed along the French coast in an unsuccessful search for the commerce raider CSS Florida, then proceeded to the Caribbean before turning northward for Boston, Massachusetts, where she was decommissioned for repairs on 26 November. She was recommissioned four months later on 1 April 1865 and sailed for the coast of Spain on 14 April in an attempt to intercept CSS Stonewall; the Confederate ram eluded Federal warships and surrendered to Spanish authorities at Havana, Cuba on 19 May. After cruising the Mediterranean Sea and the English Channel south to Monrovia, Liberia, Kearsarge was decommissioned on 14 August 1866 in the Boston Navy Yard.

Kearsarge was recommissioned on 16 January 1868 and sailed on 12 February to serve in the South Pacific operating out of Valparaíso, Chile. On 22 August, she landed provisions for destitute earthquake victims in Peru. She continued to watch over American commercial interests along the coast of South America until 17 April 1869. Then she sailed to watch over American interests among the Marquesas, Society Islands, Navigators Islands, and Fiji Islands. She also called at ports in New South Wales and New Zealand before returning to Callao, Peru on 31 October. She resumed duties on the South Pacific Station until 21 July 1870, then cruised to the Hawaiian Islands before being decommissioned in the Mare Island Navy Yard on 11 October 1870.

A replica of Kearsarge was on display at the 1893 GAR National Convention in Indianapolis, Indiana[2]

Kearsarge was recommissioned on 8 December 1873 and departed on 4 March 1874 for Yokohama, Japan, arriving there on 11 May. She cruised on Asiatic Station for three years, protecting American citizens and commerce in China, Japan, and the Philippines. From 4 September to 13 December, she carried Professor Asaph Hall's scientific party from Nagasaki, Japan, to Vladivostok, Russia, to observe the transit of Venus. She departed Nagasaki on 3 September 1877, and via the Suez Canal, she visited Mediterranean ports before returning to Boston on 30 December. She was decommissioned at Portsmouth, New Hampshire on 15 January 1878.

Kearsarge was recommissioned on 15 May 1879 for four years of duty in the North Atlantic ranging from Newfoundland to the Caribbean Sea and the coast of Panama. She departed New York on 21 August 1883 to cruise for three years in the Mediterranean, then Northern European waters, and finally along the west coast of Africa. She returned to Portsmouth on 12 November and was decommissioned in the Portsmouth Navy Yard on 1 December 1886. 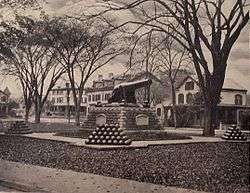 A cannon from Kearsarge stood in West Park in Stamford, Connecticut from Memorial Day, 1901 until 1942, when it was hauled away as scrap metal during World War II. Cast at West Point in 1827, it had also been used on the USS Lancaster.[3]

Kearsarge was recommissioned on 2 November 1888 and largely spent her remaining years protecting American interests in the West Indies, off Venezuela, and along the Central Americas. On President Harrison's orders, she sailed to Navassa Island in 1891 to investigate labor conditions there. She departed Haiti on 20 January 1894 for Bluefields, Nicaragua, but she wrecked on a reef off Roncador Cay on 2 February; her officers and crew made it safely ashore.

Congress appropriated $45,000 to tow Kearsarge home, but a salvage team of the Boston Towboat Company found that she could not be refloated. Some artifacts were saved from the ship, including the ship's Bible. The salvaged items, along with a damaged section of her stern post with an unexploded shell from CSS Alabama still embedded in it, are now stored or on display at the Washington Navy Yard.

Kearsarge was struck from the Naval Vessel Register in 1894.

Liverpool writer Jimmy McGovern has written a play, King Cotton, which culminates with the battle between Kearsarge and Alabama. It premiered at The Lowry in September 2007.

Clive Cussler (born July 15, 1931) American adventure novelist and marine archaeologist, has written the novel Valhalla Rising, in which Kearsarge is attacked by a submerged vessel and run aground, causing her wreck.

This article incorporates text from the public domain Dictionary of American Naval Fighting Ships. The entry can be found here.