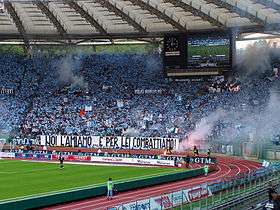 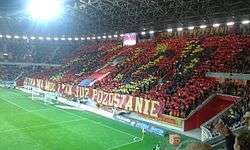 Ultras are a type of football fan renowned for ultra-fanatical support, occasionally to the point of violence and hateful chants and slogans. They are predominantly followers of association football teams.

The behavioural tendency of ultras groups includes the use of flares (primarily in tifo choreography), vocal support in large groups and the displaying of banners at football stadiums, all of which are designed to create an atmosphere which encourages their own team and intimidates opposing players and supporters. The use of elaborate displays in stadiums often is common, as well.

The actions of ultras groups are occasionally extreme and may be influenced by political ideologies such as conservatism or socialism, or views on racism, ranging from avowed nationalists to anti-fascist.[1] In some instances, this goes to the point where the passionate and loyal support of one's team becomes secondary to the theoretical ideology of the ultras phenomenon.[2] In recent decades, the culture has become a focal point for the movement against the commercialisation of sports and football in particular.[3]

In 2013, the Associated Press stated that the Egyptian Ultras network was one of the most organized movements in Egypt after the Muslim Brotherhood.[4]

The origin of the ultras movement is disputed,[5] with many supporters groups from various countries making claims solely on the basis of their dates of foundation. The level of dispute and confusion is aided by a contemporary tendency (mainly in Europe) to categorize all groups of overtly fanatical supporters as ultras. Supporters groups of a nature comparable to the ultras have been present in Brazil since 1939, when the first torcida organizada was formed. Inspired by the torcidas and the colourful scenes of the 1950 World Cup, supporters of Hajduk Split formed Torcida Split on 28 October 1950.[6] The group is often cited as the oldest torcida style group in Europe.

One country closely associated with the ultras movement is Italy.[5][7] The first Italian ultras groups were formed in 1951, including the Fedelissimi Granata of Torino. The 1960s saw the continuing spread and development of the culture with the formation of the Fossa dei Leoni and Boys San groups, the former often regarded in Italy as the first full-fledged ultras group. The term Ultras was used as a name for the first time in 1969 when supporters of Sampdoria formed the Ultras Tito Cucchiaroni and fans of Torino formed the Ultras Granata. The style of support that would become synonymous with Italian football developed most during the 1970s as more groups formed including the radical Lazio Ultras in 1974 with a strong predominance of fascist slogans and chants amongst other groups such as Hellas Verona supporters. The active support of the ultras became more apparent, in contrast with the "traditional" culture, choreographic displays, signature banners and symbols, giant flags, drums and fireworks became the norm as groups aimed to take their support to higher levels.[8] The decade also saw the violence and unrest of Italian society at the time overlap with the ultras movement, adding a dimension that has plagued it ever since.[9]

The ultras movement spread across Europe during the 1980s, 1990s and 2000s, starting with the countries geographically closest to Italy.[10] The effects on the footballing cultures of the countries involved were more profound in some and less in others, as a certain level of organization amongst fans and/or a tradition of colourful support would have long been present in many countries. Germany, Belgium and the Netherlands, three countries whose footballing cultures were more influenced by British football in the past, experienced significant change. English football is a rare example of a footballing culture in Europe which hasn't been heavily influenced by the ultras movement.[7][8]

The clubs in Egypt became a major political force during the uprising against Mubarak in 2011, but were known for long-standing animosity with the police.[4] When 38 members of the Ultras Devils were arrested in Shebeen al-Kom for "belonging to an illegal group" plus additional violent offences, it was seen as a crackdown on the organizations by authorities.[4] Ultras in Turkey have also played a role in the 2013 protests in Turkey, with fans of arch-rivals Galatasaray, Fenerbahçe and Besiktas shielding protesters and allying against police violence. Police responded with raids in the Besiktas neighbourhood, the main breeding ground of ultras of the Beşiktaş club, the Carsi Group.[11]

Ultras groups are usually centred on a core group of founders or leaders (who tend to hold executive control),[12] with smaller subgroups organized by location, friendship or political stance. Ultras tend to use various styles and sizes of banners and flags bearing the name and symbols of their group.[12][13] Some ultras groups sell their own merchandise to raise funds for performing displays.[12][14] An ultras group can number from a handful of fans to hundreds or thousands, with larger groups often claiming entire sections of a stadium for themselves. Ultras groups often have a representative who liaises with the club owners on a regular basis, mostly regarding tickets, seat allocations and storage facilities.[12] Some clubs provide groups with cheaper tickets, storage rooms for flags and banners and early access to the stadium before matches in order to prepare displays. These types of favoured relationships are often criticized when ultras groups abuse their power.[1]

While ultras groups can become violent, the majority of matches attended by ultras conclude with no violent incidents. Unlike hooligan firms, whose main aim is to fight hooligans of other clubs, the main focus of ultras is generally to support their own team.[15] Some hooligans try to be inconspicuous when they travel; usually not wearing team colours, in order to avoid detection by the police. Within the ultra or hooligan culture however, those dressing to "blend in" would be referred to as casuals, which is viewed by some as a branch of hooliganism, yet still maintaining its own independence and culture. Ultras tend to be more conspicuous when they travel, proudly displaying their scarves and club colours while arriving en masse, which allows the police to keep a close eye on their movements.