The USCCB adopted its current name in July 2001. The organization is a registered corporation based in Washington, D.C., As with all bishops' conferences, certain decisions and acts of the USCCB must receive the recognitio, or approval of the Roman dicasteries, which are subject to the immediate and absolute authority of the Pope.

The first national organization of Catholic bishops in the United States was founded in 1917 as the National Catholic War Council (NCWC), formed to enable U.S. Catholics to contribute funds for the spiritual care of Catholic servicemen during World War I.

In 1919 Pope Benedict XV urged the college of bishops around the world to assist him in promoting the labor reforms first articulated by Pope Leo XIII in Rerum novarum. In response, the U.S. Catholic episcopate organized the National Catholic Welfare Council in 1919. They also created the first Administrative Committee of seven members to manage daily affairs between plenary meetings, with archbishop Edward Joseph Hanna of San Francisco as the first chairman. Headquarters were established in Washington, D.C.

The National Conference of Catholic Bishops had appointed James T. McHugh during April 1967 to lead the early formation of what was later to become the National Right to Life Committee. The NRLC was itself formed in 1968 under the auspices of the National Conference of Catholic Bishops to coordinate information and strategy between developing local and state Catholic pro-life groups and is the oldest and the largest national organization against legal abortion in the United States with NRLC affiliates in all 50 states and over 3,000 local chapters nationwide.[3] These NRLC affiliate groups were forming in response to efforts to change abortion laws based on model legislation proposed by the American Law Institute (ALI). New Jersey attorney Juan Ryan served as the organization's first president. NRLC held a nationwide meeting of pro-life leaders in Chicago in 1970 at Barat College. The following year, NRLC held its first convention at Macalestar College in St. Paul, Minnesota.

Episcopal conferences were first established as formal bodies by the Second Vatican Council (Christus Dominus, 38), and implemented by Pope Paul VI's 1966 motu proprio Ecclesiae sanctae. In order to fulfill the new requirements for national conferences of bishops, the American bishops established – in 1966 – the National Conference of Catholic Bishops (NCCB) and its secular arm, the United States Catholic Conference (USCC).

As separate organizations with distinct responsibilities, the NCCB focused on internal ecclesiastical concerns while the USCC carried forward work in society at large. The NCCB enabled the bishops to deliberate and respond collectively on a broad range of issues, with work being carried out through various secretariats, standing committees, and ad hoc committees. 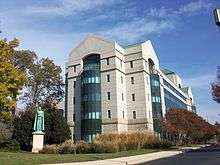 For a list of regions, see List of Roman Catholic dioceses (structured view) § Episcopal Conference of the United States of America. 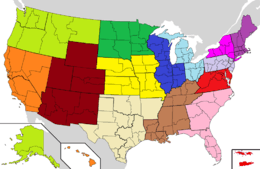 The USCCB divides the Latin Church dioceses of the United States into fourteen geographical regions and a fifteenth region that consists of the Eastern Catholic eparchies and exarchate.

The dioceses of the United States are grouped into fifteen regions. Fourteen of the regions (numbered I through XIV) are geographically based, for the Latin Catholic dioceses. The Eastern Catholic eparchies (dioceses) constitute Region XV.

Office of the General Secretary

Office of the General Counsel

Department of Migration and Refugee Services

Office for Film and Broadcasting

The USCCB are issuing the "Ethical and Religious Directives for Catholic Health Care Services"[4][5] that have in some cases caused doctors to refuse treatment of patients although in an emergency situation.[6]

In March 2012, regarding the federal requirement that employers who do not support contraception but are not religious institutions per se must cover contraception via health insurance, USCCB decided to "continue its 'vigorous opposition to this unjust and illegal mandate'".[7]

In June and July 2012, the USCCB promoted a campaign of events called the Fortnight for Freedom to protest government activities that in their view impinged on their religious liberty.

In November 2004, the USCCB kicked off the National Pastoral Initiative for Marriage, a multi-year effort to promote traditional marriage values.

The National Pastoral Initiative for Marriage is a multi-year, far-reaching effort to promote traditional marriage values created by the United States Conference of Catholic Bishops in 2004.

Led by Archbishop Joseph Edward Kurtz of Louisville, and the USCCB's Office of Laity, Marriage, Family Life and Youth, as well as the Catholic Communication Campaign, the Initiative synthesizes social-science research, Catholic teaching and pastoral practice, and the everyday experiences of married men and women to bolster marriage as a social institution and Christian sacrament.

The NPIM has largely been promoted among the general public in the United States through radio and television public-service announcements.[10]

In the advertising, couples speak candidly about the everyday things done for each other to show love and commitment as they answer the question: “What have you done for your marriage today?” Viewers are then directed to visit,[11] an online repository of resources, tips and stories that can help strengthen a marriage.

The NPIM is expected to run through 2011, with the next phase including a bishops’ pastoral letter.

The budget for 2011 is US$180 million. Money is raised by assessing the individual dioceses.[12]