Ursula Franklin Academy (colloquially known as UFA; pronounced as oo-fah) is a high school located in the High Park neighbourhood of Toronto, Ontario, Canada owned by the Toronto Board of Education until its merger into the Toronto District School Board. Originally located in the Dufferin-Bloor area at 90 Croatia Street, UFA moved in 2002 to share a building with Western Technical-Commercial School and The Student School. UFA has no feeder schools and as a result, students attend UFA from a variety of elementary schools in Toronto; students generally attend upon applying and winning a space secured through a competitive lottery system. Founded in 1995, Ursula Franklin Academy's style of teaching is a doctrine of Dr. Ursula Franklin's work in the field of education. It was the Toronto Board of Education's first school to require students to wear uniforms. 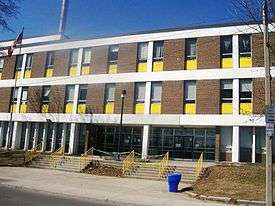 A think tank created the concept of the school.[1]

Ursula Franklin Academy opened in the fall of 1995 in the former Brockton High School, which originally was built and named as 1966. The Toronto Board of Education (TBE) planned it as a traditional academic school that had focus on languages, mathematics, science, and technology. John Doherty, a trustee in the TBE, said that "We're not trying to create a magnet school or an elite school that has waiting lists and so on. We want it serving the local community."[2] Ursula Franklin Academy moved into Western Technical-Commercial School in September 2002.[3] 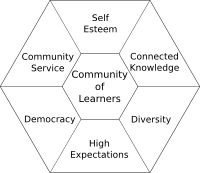 UFA's school values are closely tied to the mindset and societal perception of its namesake, Dr. Ursula Franklin.

Ursula Franklin Academy is a small community of learners which offers integrated liberal arts packages, in addition to the general fundamental courses of T.D.S.B curriculum, preparing students for academic programs at the post-secondary level.

Students generally wear a navy blue uniform, although variations of uniform style do exist. The existing variations include white and navy blue polo shirts and T-shirts; Oxford shirts; and rugby shirts sporting the school colours. Students alter their uniform to improve the already existing requirements. Initiatives are currently going on in order to reform the uniform.

When the school was in the planning stages, students were to wear school uniforms. At the time no other school in the Toronto Board of Education required uniforms.[2]

When the school opened in 1995, Dr. Ursula Franklin chose the official school colours as navy blue, hunter green and burgundy. These colours were chosen because in combination, they do not represent the flag of any nation-state. This was intended to create an atmosphere of global citizenship for students at UFA. Students, Teachers and the Administration are working on adding different colour combinations to the uniform. The uniform will still not represent the flag of any nation-state.

At Ursula Franklin Academy students go through a four-day rotation. Unique to the school is the Enriched Wednesday program. Through Wednesdays students get to explore interests that may not be offered as part of the regular curriculum. Each month, students sign up for sessions that can include anything from skiing all day to beach volleyball to rock climbing to exploring neuro-science. Some typical Wednesday sessions that are offered almost every block are: student council, guitar jam sessions, fashion class, study halls, remedial tutorials, yearbook preparation, jazz appreciation, films of nature, etc. Students are encouraged to run their own Wednesday sessions with a supervising teacher or staff member.

Although UFA is a rather small school, many of its students and teachers participate in UFA's sports teams. Aside from the usual high school teams (boys' soccer, baseball, swim team), UFA offers some unusual sports. The Dragonboat Team and the Ultimate Team (a.k.a. the Ultimate Frisbee Team) are exemplary highlights. Although many teams are coached by teachers and/or "community coaches", some teams are coached and managed by UFA students (e.g. the Ultimate Team).