Valvettithurai or VVT (Tamil: வல்வெட்டித்துறை Valveṭṭittuṟai; Sinhalese: වල්වෙට්ටිතුරෙයි) is a town of Jaffna District on the northeast coast of the Jaffna Peninsula in Northern Province, Sri Lanka governed by an Urban Council of the same name. The town has a population of 18,000. Valvettithurai was historically known as a seafaring town and its olden shipping trade.

The town is popularly known for being the birthplace of Velupillai Prabhakaran, the head of the Liberation Tigers of Tamil Eelam or the Tamil Tigers, a Tamil nationalist militant group that waged a war for independence in the North and East. Valvettithurai is also the place of birth, of the leaders of the Tamil Eelam Liberation Organization, Kuttimani and Nadarajah Thangathurai.[1]

Valvettithuri is a coastal town bounded by the Indian Ocean to its north. It is situated at the tip of the northern province and is considered as a place of strategic importance due to the presence of the Palk Strait and its close proximity to the coast of the Indian state of Tamil Nadu.[1] The northern coast of the island was severely impacted by the 2004 Indian Ocean Tsunami which claimed several thousand lives.

It is also flourished by the Thondamannar lagoon which meets the sea through a long, narrow channel to the west of the town. The lagoon's water is brackish to saline.The lagoon has extensive mudflats, seagrass beds and mangrove swamps, particularly Avicennia. The lagoon attracts a wide variety of water birds including American Flamingoes, ducks, gulls, terns and other shorebirds.

There exists a barrage and bridge on the Highway preventing sea water from entering into the Thondamannar lagoon which is a primary source of drinking water for the locals. Across the bridge, to the west of the town, lie the towns of Paalai and Kankesanturai, much of whose lands have been seized under the Sri Lankan military's High Security Zone(HSZ). To the eastern end of the town, is the town of Paruthithurai or Point Pedro, the northern most point of the island.[3]

The temperature varies from 26-34 °C. The town experiences a moderate climate in September–January. It receives much of its rainfall during the North East monsoon between October to December. Being a coastal town, the weather is also influenced by cyclones and tropical currents.

The population is mainly Sri Lankan Tamils of Hindu or Catholic faith. The main industry is farming, fishing and trading. The mouth of the Thondamannar lagoon has the popular Hindu temple dedicated to Lord Murugan called Selva Sannithy. The town had been severely affected by the country's civil war with a number of forced disappearances and attacks against local civilians by the Sri Lankan military. It was the site of two brutal massacres of local Tamil civilians by occupying armies. In 1985 the Sri Lankan military rounded local people up into the library and blew up the building.[5] In 1989 the Indian army rounded up people into the village square and opened fire on them, as well as people in shops and their homes.[6] 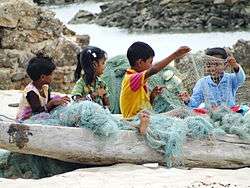 The Valvai Chithamabara College is the major higher educational institution in Valvettithurai. The town is the home to several primary schools:[7]

The town also houses a good number of public libraries.[8]