This article is about the British magazine published from 1868 to 1914. For other Vanity Fair magazines, see Vanity Fair (magazines). 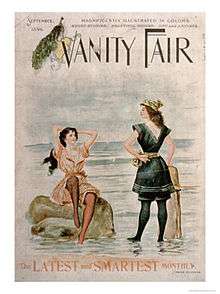 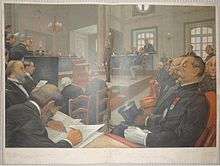 The second Vanity Fair was a British weekly magazine published from 1868 to 1914.

Subtitled "A Weekly Show of Political, Social and Literary Wares", it was founded by Thomas Gibson Bowles, who aimed to expose the contemporary vanities of Victorian society. The first issue appeared in London on 7 November 1868. It offered its readership articles on fashion, current events, the theatre, books, social events and the latest scandals, together with serial fiction, word games and other trivia.

Bowles wrote much of the magazine himself under various pseudonyms, such as "Jehu Junior", but contributors included Lewis Carroll, Arthur Hervey, Willie Wilde, P. G. Wodehouse, Jessie Pope and Bertram Fletcher Robinson (who was editor from June 1904 to October 1906).[1]

Thomas Allinson bought the magazine in 1911 from Frank Harris, by which time it was failing financially. He failed to revive it and the final issue of Vanity Fair appeared on 5 February 1914, after which it was merged into Hearth and Home.

A full-page, colour lithograph of a contemporary celebrity or dignitary appeared in most issues, and it is for these caricatures that Vanity Fair is best known then[2] and today.[3] Subjects included artists, athletes, royalty, statesmen, scientists, authors, actors, soldiers, religious personalities, business people and scholars. More than two thousand of these images appeared, and they are considered the chief cultural legacy of the magazine, forming a pictorial record of the period. They were produced by an international group of artists, including Max Beerbohm, Sir Leslie Ward (who signed his work "Spy" and "Drawl"), the Italians Carlo Pellegrini ("Singe" and "Ape"), Melchiorre Delfico ("Delfico"), Liborio Prosperi ("Lib"), the Florentine artist and critic Adriano Cecioni, the French artist James Jacques Tissot (Coïdé), and the American Thomas Nast.[4]