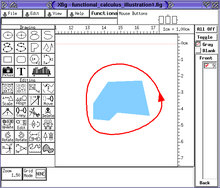 A screenshot of the xfig vector graphics editor 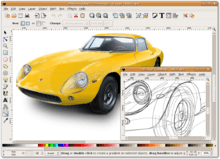 A screenshot of the modern vector graphics editor Inkscape

Some vector editors support animation, while others (e.g. Adobe Flash, Animatron or Synfig Studio) are specifically geared towards producing animated graphics. Generally, vector graphics are more suitable for animation, though there are raster-based animation tools as well.

Vector editors are closely related to desktop publishing software such as Adobe InDesign or Scribus, which also usually include some vector drawing tools (usually less powerful than those in standalone vector editors). Modern vector editors are capable of, and often preferable for, designing unique documents (like flyers or brochures) of up to a few pages; it's only for longer or more standardized documents that the page layout programs are more suitable.

Special vector editors are used for computer-assisted drafting. These are not suitable for artistic or decorative graphics, but are rich in tools and object libraries used to ensure precision and standards compliance of drawings and blueprints.

Finally, 3D computer graphics software such as Maya, Blender or 3D Studio Max can also be thought of as an extension of the traditional 2D vector editors, as they share some common concepts and tools.