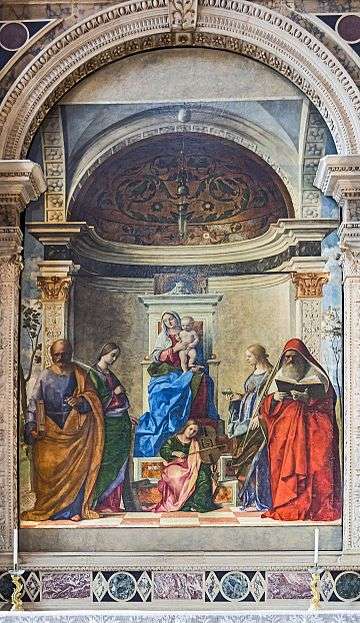 From the later part of the 15th century, Venice had a distinctive, thriving and influential art scene. Beginning with the work of Giorgione (c. 1477–1510), and the workshop of Giovanni Bellini (c. 1430–1516), major artists of the Venetian school included Titian (1489–1576), Tintoretto (1518–1594), Veronese (1528–1588) and the Bassano (1510–1592). Considered to bring a primacy of color over line,[1] this tradition was seen to contrast with the Mannerism then prevalent in the rest of Italy, and the Venetian style is viewed as having had a great influence on the subsequent development of painting.[2]

During the early-15th century, Venetian art was dominated by the earlier styles arising from its Byzantine links,[1] as exemplified by the work of the Vivarini family. From the late-15th century, Venetian painting developed through links with Andrea Mantegna (1431–1506) (from nearby Padua) and of a visit by Antonello da Messina (c. 1430–1479), who introduced the oil painting technique of Early Netherlandish painting, probably acquired through his training in Naples.[3] Another external factor was the visit by Leonardo da Vinci, who was particularly influential on Giorgione.[1]

During his long career, Bellini has been credited with creating the Venetian style.[2] From his earlier works, such as his Madonna of the Trees (c. 1487) which largely reflect the linear approach of Mantegna, he later developed a softer style, where glowing colours are used to represent form and suggest an atmospheric haze. Applying this approach in his San Zaccaria Altarpiece (1505), the high viewpoint, the uncluttered and interconnected figures arranged in space, and the subtle gestures all combine to form a tranquil yet majestic image.[4] With such works he has been described as reaching the High Renaissance[4] ideals, and certainly expresses the key distinctive factors of the Venetian school. 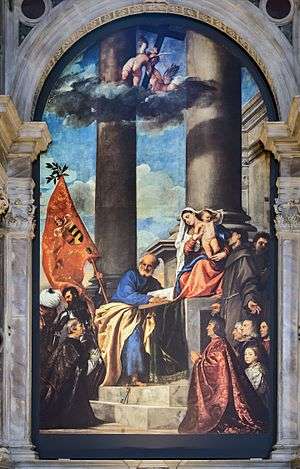 Giorgione and Titian were both apprentices at Bellini's workshop. They collaborated on numerous paintings, and their styles could be so similar that it is difficult to conclusively assign authorship. A speciality of Giorgione's were idyllic Arcadian scenes, with an example being his Three Philosophers, and this element was adopted by his master Bellini, who increased the landscape in his many Madonnas,[5] and by Titian in work like Pastoral Concert (1508) and Sacred and Profane Love (1515). This emphasis on nature as a setting was a major contribution of the Venetian School.

Titian, through his long and productive life, with a wide variety of themes and subjects was the most influential and greatest of all the Venetian School painters.[6][7] His early Pesaro Madonna (1519–1528) shows a bold new composition for such a traditional religious subject,[8] putting the focal point of the Madonna off from the centre and on a steep diagonal. Colours are used to enliven the painting, but also to unify the composition, such as by the large red flag on the left counterbalancing the red in the Madonna[9] and such skilful and sumptuous use of colour became a hallmark of the Venetian style. 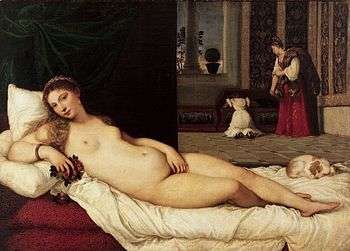 Although pre-figured by the Sleeping Venus (completed by Titian after Giorgione's death in 1510) Titian is credited with establishing the reclining female nude as an important subgenre in art. Using mythological subjects, works such as the Venus of Urbino (1538) richly depict the fabrics and other textures, and use a composition that is carefully controlled by organising colours. As an example, in this painting the diagonal of the nude is matched by the opposite diagonal between the red of the cushions in the front with the red skirts of the woman in the background.[10] With such paintings, readily transported by virtue of being oils on canvas, Titian became famous, and helped establish a reputation for Venetian art. Possession of such paintings symbolised luxurious wealth,[11] and for his skills in portraiture he was sought by powerful, rich individuals, such as in his long relationship working for Emperor Charles V and Philip II of Spain.[12][13] 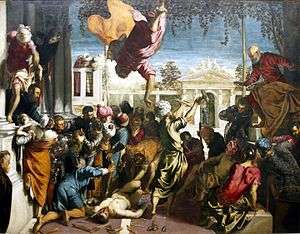 Miracle of the Slave (1548), one of a trio of Tintoretto works on St Mark, the patron saint of Venice.

Although Tintoretto is sometimes classified as a Mannerist artist,[14] he also incorporates Venetian and individualistic aspects. In his Miracle of the Slave (1548), the Mannerist features include the crowded scene, the twisting linking of figures (as in the central figures, from the foreshortened slave on the ground to the miraculous figure of St. Mark in the sky, through the turbaned, grey-robed figure), and the drama in the gestures and poses. But the colouring maintains the warm reds, golds and greens of the Venetian school, and the figures are arranged in real three-dimensional space, in contrast to the more compressed compositions of many Mannerist works, and with its intensely theatrical, stage-like display his painting is a forerunner of the Baroque.[15]

Following Tintoretto, were Veronese, and the Bassano. These are a few of the most outstanding in the great number of artists in the Venetian tradition, many originally from outside the Republic's territory.

The Venetian school had a great influence of subsequent painting, and the history of later Western art has been described as a dialogue between the more intellectual and sculptural/linear approach of the Florentine and Roman traditions, and the more sensual, poetic, and pleasure-seeking of the colourful Venetian school.[16] Specifically through the presence of Titian in Spain, the Venetian style influenced later Spanish art, including that of Velázquez,[17] and through Rubens was more broadly transmitted through the rest of Europe.

Although not considered part of the Venetian school, it provided the backdrop to 18th-century Venetian painting, which had a final flowering in Tiepolo's decorative painting and Canaletto's and Guardi's panoramic views. The extinction of the Republic by French Revolutionary armies in 1797 effectively brought the distinctive Venetian style to an end; it had at least arguably outlasted its rival Florence in that respect.