Venus, Cupid, Folly, and Time (also called An Allegory of Venus and Cupid and A Triumph of Venus) is an allegorical painting by the Florentine artist Agnolo Bronzino. It is now in the National Gallery, London.[1]

About 1546, Bronzino was commissioned to create a painting that has come to be known as Venus, Cupid, Folly, and Time. It displays the ambivalence, eroticism, and obscure imagery that are characteristic of the Mannerist period, and of Bronzino's master Pontormo.

The painting may have been commissioned by Cosimo I de' Medici, Grand Duke of Tuscany or by Francesco Salviati, to be presented by him as a gift to Francis I of France. Vasari wrote that it was sent to King Francis, though he does not specify by whom. The erotic imagery would have appealed to the tastes prevalent in both the Medici and French courts at this time. The attention to texture and wealth is also consistent with Bronzino's aristocratic patronage. The painting was brought by Napoleon from Paris to Vienna, where in 1813, Johann Keglević gained possession of the painting from Franz Wenzel, Graf von Kaunitz-Rietberg.[2][3] Since 1860 it has been in London.

The figure of Venus can be likened to a precious object (such as a marble statue) in a luxurious setting, desirable because of her unavailability. In this large, unusually cold composition, which is deliberately constructed on a counterpoint of opposing movements, the finest work is in the treatment of the faces. Bronzino, known above all as a portrait painter, painted several carefully drawn portraits of the Medici family.[3] 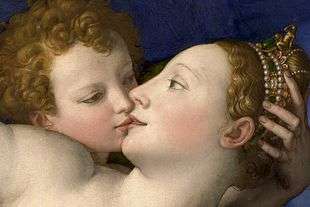 Crowded into the claustrophobic foreground of the painting are several figures whose identities have been the subject of extensive scholarly debate. At times it has also been called A Triumph of Venus. Its meaning, however, remains elusive. Cupid, along with his mother (Venus) and the nude putto, to the right, are all posed in a typical Mannerist figura serpentinata form.

The two central figures are easily identified by their attributes as Venus and Cupid. For example, she holds the golden apple she won in the Judgement of Paris,[4] [5] [6] while he sports the characteristic wings and quiver. Both figures are nude, illuminated in a radiant white light. Cupid fondles his mother's bare breast and kisses her lips.

The bearded, bald figure to the upper right of the scene is believed to be Time, in view of the hourglass behind him.[7] He sweeps his arm forcefully out to his right. Again, it is difficult to interpret his gesture with any certainty; it could be to prevent the figure at the far left of the picture from shielding the incestuous transgressions of Venus and the adolescent Cupid with the billowing blue fabric that provides a screen between the figures in the fore and background. Many scholars believe that his gesture seems to say "Time is fleeting, and you never know when it may be all over." The figure opposite Time, and also grasping at the drapery, is usually called Oblivion because of the lack of substance to his form—eyeless sockets and mask-like head. The mask-like face of this figure is echoed by the image of two actual masks in the lower right-hand corner.

There is also Folly, to the right of Venus and Cupid.

The identity of the remaining figures is even more ambiguous. The old woman rending her hair (see detail at right) has been called Jealousy—though some believe her to represent the ravaging effects of syphilis[7] (result of unwise intercourse). The creature at the right-hand side behind Folly, with a girl's face and disjointed, grotesque body, extending a honeycomb with her left hand attached to her right arm, and hiding behind her back a scorpion's barb, may represent Pleasure and Fraud.[8][7] There is, however, no consensus on these identifications.[7]