A veterinary technician in Ethiopia shows the owner of an ailing donkey how to sanitize the site of infection.

Veterinary medicine is the branch of medicine that deals with the prevention, diagnosis and treatment of disease, disorder and injury in non-human animals. The scope of veterinary medicine is wide, covering all animal species, both domesticated and wild, with a wide range of conditions which can affect different species.

Veterinary medicine is widely practiced, both with and without professional supervision. Professional care is most often led by a veterinary physician (also known as a vet, veterinary surgeon or veterinarian), but also by paraveterinary workers such as veterinary nurses or technicians. This can be augmented by other paraprofessionals with specific specialisms such as animal physiotherapy or dentistry, and species relevant roles such as farriers.

Veterinary science helps human health through the monitoring and control of zoonotic disease (infectious disease transmitted from non-human animals to humans), food safety, and indirectly through human applications from basic medical research. They also help to maintain food supply through livestock health monitoring and treatment, and mental health by keeping pets healthy and long living. Veterinary scientists often collaborate with epidemiologists, and other health or natural scientists depending on type of work. Ethically, veterinarians are usually obliged to look after animal welfare.

The Egyptian Papyrus of Kahun (1900 BCE) and Vedic literature in ancient India offer one of the first written records of veterinary medicine.[1] (See also Shalihotra) ( Buddhism) First Buddhist Emperor of India edicts of Asoka reads: "Everywhere King Piyadasi (Asoka) made two kinds of medicine (चिकित्सा) available, medicine for people and medicine for animals. Where there were no healing herbs for people and animals, he ordered that they be bought and planted."[2]

The first attempts to organize and regulate the practice of treating animals tended to focus on horses because of their economic significance. In the Middle Ages from around 475 CE, farriers combined their work in horseshoeing with the more general task of "horse doctoring". In 1356, the Lord Mayor of London, concerned at the poor standard of care given to horses in the city, requested that all farriers operating within a seven-mile radius of the City of London form a "fellowship" to regulate and improve their practices. This ultimately led to the establishment of the Worshipful Company of Farriers in 1674.[3]

Meanwhile, Carlo Ruini's book Anatomia del Cavallo, (Anatomy of the Horse) was published in 1598. It was the first comprehensive treatise on the anatomy of a non-human species.[4] 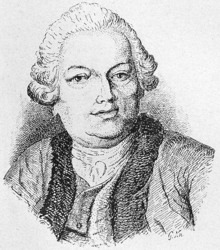 Claude Bourgelat established the earliest veterinary college in Lyon in 1762.

The first veterinary college was founded in Lyon, France in 1762 by Claude Bourgelat.[5] According to Lupton, after observing the devastation being caused by cattle plague to the French herds, Bourgelat devoted his time to seeking out a remedy. This resulted in his founding a veterinary college in Lyon in 1761, from which establishment he dispatched students to combat the disease; in a short time, the plague was stayed and the health of stock restored, through the assistance rendered to agriculture by veterinary science and art."[6]

The Odiham Agricultural Society was founded in 1783 in England to promote agriculture and industry,[7] and played an important role in the foundation of the veterinary profession in Britain. A founding member, Thomas Burgess, began to take up the cause of animal welfare and campaign for the more humane treatment of sick animals.[8] A 1785 Society meeting resolved to "promote the study of Farriery upon rational scientific principles.” 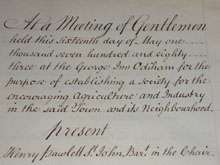 The physician James Clark wrote a treatise entitled Prevention of Disease in which he argued for the professionalization of the veterinary trade, and the establishment of veterinary colleges. This was finally achieved in 1790, through the campaigning of Granville Penn, who persuaded the Frenchman, Benoit Vial de St. Bel to accept the professorship of the newly established Veterinary College in London.[7] The Royal College of Veterinary Surgeons was established by royal charter in 1844. Veterinary science came of age in the late 19th century, with notable contributions from Sir John McFadyean, credited by many as having been the founder of modern Veterinary research.[9]

In the United States, the first schools were established in the early 19th century in Boston, New York and Philadelphia. In 1879, Iowa Agricultural College became the first land grant college to establish a school of veterinary medicine.[10] Suzanne Saueressig became the first accredited female veterinarian in Missouri in 1955.[11]

Veterinary care and management is usually led by a veterinary physician (usually called a vet, veterinary surgeon or veterinarian). This role is the equivalent of a doctor in human medicine, and usually involves post-graduate study and qualification.

In many countries, the local nomenclature for a vet is a protected term, meaning that people without the prerequisite qualifications and/or registration are not able to use the title, and in many cases, the activities that may be undertaken by a vet (such as animal treatment or surgery) are restricted only to those people who are registered as vet. For instance, in the United Kingdom, as in other jurisdictions, animal treatment may only be performed by registered vets (with a few designated exceptions, such as paraveterinary workers), and it is illegal for any person who is not registered to call themselves a vet or perform any treatment.

Most vets work in clinical settings, treating animals directly. These vets may be involved in a general practice, treating animals of all types; may be specialized in a specific group of animals such as companion animals, livestock, laboratory animals, zoo animals or horses; or may specialize in a narrow medical discipline such as surgery, dermatology, laboratory animal medicine, or internal medicine.

As with healthcare professionals, vets face ethical decisions about the care of their patients. Current debates within the profession include the ethics of purely cosmetic procedures on animals, such as declawing of cats, docking of tails, cropping of ears and debarking on dogs.

US and South African army veterinary technicians prepare a dog for spaying.

An eye exam of a kitten under way prior to the kitten's adoption.
Main article: Paraveterinary workers

Paraveterinary workers, including veterinary nurses, technicians and assistants, either assist vets in their work, or may work within their own scope of practice, depending on skills and qualifications, including in some cases, performing minor surgery.

The role of paraveterinary workers is less homogeneous globally than that of a vet, and qualification levels, and the associated skill mix, vary widely.

A number of professions exist within the scope of veterinary medicine, but which may not necessarily be performed by vets or veterinary nurses. This includes those performing roles which are also found in human medicine, such as practitioners dealing with musculoskeletal disorders, including osteopaths, chiropractors and physiotherapists.

There are also roles which are specific to animals, but which have parallels in human society, such as animal grooming and animal massage.

Some roles are specific to a species or group of animals, such as farriers, who are involved in the shoeing of horses, and in many cases have a major role to play in ensuring the medical fitness of the horse.

Veterinary research includes research on prevention, control, diagnosis, and treatment of diseases of animals and on the basic biology, welfare, and care of animals. Veterinary research transcends species boundaries and includes the study of spontaneously occurring and experimentally induced models of both human and animal disease and research at human-animal interfaces, such as food safety, wildlife and ecosystem health, zoonotic diseases, and public policy.[12]

Monographs and other speciality texts