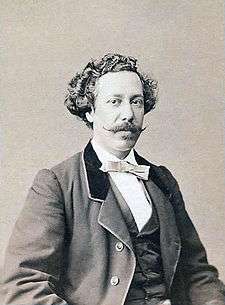 Victor Meirelles de Lima (18 August 1832, Florianópolis – 22 February 1903, Rio de Janeiro) was a Brazilian painter who is best known for his works relating to his nation's culture and history.

His parents were recent immigrants from Portugal. He displayed an early talent for art, producing his first known work (a landscape of Santa Catarina Island), at the age of fourteen. This work impressed Jerônimo Coelho, an Imperial Counselor, who brought Meirelles to Rio de Janeiro and introduced him to Félix Taunay, Director of the Academia Imperial de Belas Artes. It was decided that the Academy would take charge of his education, so he enrolled there in 1847[1] and remained until 1852. That year, his painting of "St.John the Baptist in Prison" won him the Prix du Voyage for a study trip to Europe.[2] 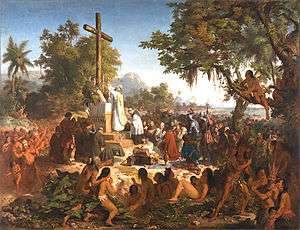 He passed through Paris, although he spent most of his time in Florence and Rome, where he studied with Tommaso Minardi[1] and Nicola Consoni at the Accademia di San Luca. In 1856, he returned to Paris and remained until 1860. During this period, he attended the École des Beaux-Arts, refining his technique with Léon Cogniet[3] and Paul Delaroche. While there he maintained contact with Manuel de Araújo Porto-Alegre, his mentor at the Imperial Academy,[1] who suggested the subject for one of Meirelle's best-known works, "Primeira Missa no Brasil" (The First Mass in Brazil), which took him two years to complete. It has since been used in numerous history textbooks and on the 1,000 Cruzeiro banknote.

Upon his return to Brazil, Emperor Pedro II awarded him the Order of Christ and made him a Knight in the Order of the Rose.[3] He also became an Honorary Professor at the Academy and later was given the Chair of History Painting.[1] In 1868, he spent time aboard several warships to complete a commission for naval history paintings and, over the next decade, executed numerous works for the Imperial Family.[2] 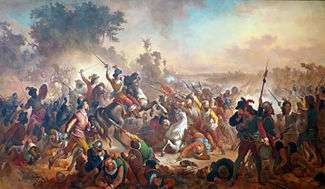 In 1879, his gigantic painting of the Second Battle of Guararapes was displayed at the Imperial Academy, alongside a painting by Pedro Américo, depicting the Battle of Avay. Meirelles and Américo had already been at odds with one another over an earlier commission so, immediately, critics began to notice similar details and accuse Meirelles of plagiarism. The controversy raged in the local press for months but, apparently, no conclusions were ever reached.[3]

In 1885, he undertook his most ambitious project; a panorama of Rio de Janeiro as seen from the Morro de Santo Antônio, a hill near the city's midpoint. With the assistance of Henri Langerock (1830-1915),[1] a Belgian Orientalist painter who came from North Africa to work on the project, it was completed in 1888. Initially it was displayed in Brussels, where it had been created, then won a Gold Medal at the Exposition Universelle (1889).

After the Republic was declared in 1889, Meirelles and other artists associated with the monarchy were removed from their posts at the Imperial Academy[1] although, officially, he was dismissed for his age. In 1893 he attempted to start a private school, together with Eduardo de Sá and Décio Villares, but was not successful.[3] Without sufficient resources, he installed his Panorama of Rio de Janeiro in a hut and charged 1,000 Réis per visitor. Any of the proceeds not used for living expenses went to the Santa Casa de Misericórdia. Eventually, though, he sank into poverty and became ill. He died, unnoticed, at his modest home during the Sunday morning Carnaval festivities.[3] His Panorama was placed into storage where it became rotted and moldy and was eventually dumped into Guanabara Bay.