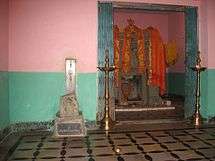 Shrine in honor of Vijaya Dasa

Vijaya Dasa (Kannada: ವಿಜಯದಾಸ) (1682–1755) was a prominent saint from the Haridasa tradition of Karnataka, India in the 18th century, and a scholar of the Dvaita philosophical tradition. Along with contemporary haridasa saints such as Gopala Dasa, Helevankatte Giriamma, Jagannatha Dasa and Prasanna Venkata Dasa, he propagated the virtues of the philosophy of Madhwacharya across South India through devotional songs called devaranama written in the Kannada language.[1] An integral part of Kannada Vaishnava devotional literature, these compositions in praise of the Hindu god Vishnu are called dasara padagalu (compositions of the dasas).[2] These compositions can be more specifically categorized as keertanas, suladis,ugabhogas, and simply padas. They were easy to sing to the accompaniment of a musical instrument and dealt with bhakti (devotion) and the virtues of a pious life.[3]

Vijaya Dasa was born in a poor Brahmin family in Cheekalaparvi in Manvi taluk of Raichur district, Karnataka state. His parents were Sri Srinivasappa and Kusamma. He left home at a young age and studied Sanskrit in Varanasi for four years. Later when his marriage was troubled by poverty, he went back to Varanasi where he became a scholar. One night, he had a dream in which the 16th century Carnatic composer and wandering saint Purandara Dasa initiated him into the Haridasa tradition and gave him the nom de plume (ankita nama) Vijaya Vittala. From that day he was called Vijaya Dasa (dasa lit, slave to God), and dedicated his life to spreading Dvaita teachings.[1]

His 25,000 extant compositions earned him the title Dasa Shrestha (noble among the dasas). His compositions which use many Sanskrit words come under the category of Kalasha and Urasu creations and are considered an important component of Kannada literature (Kannada Sahitya).[4] His purported miracles include calming the Ganges, entering it without getting wet, preventing a woman from committing suicide, resurrecting his son, and making an uneducated man speak difficult Sanskrit proficiently.[4] He is among the group credited with starting the practice of singing devotional songs while walking up the Tirumala hills in modern Andhra Pradesh. These hills are the location of the Tirumala Venkateswara Temple, an important pilgrim locations for Vaishnava Hindus.[5]