In the Middle Ages Villingen was a town under Austrian lordship. During the Protestant Reformation it remained Catholic. Villingen came to international attention when it was besieged by marshal Tallard in 1704. Colonel Von Wilstorff put up a stout defence of the outdated fortifications, and after six days the siege failed.

Schwenningen remained a village until the 19th century. In 1858 the first watch factory was established, and watchmaking and precision mechanics have been important industries ever since.

As part of the Baden-Württemberg territorial reform of 1972, Villingen and Schwenningen were merged with a number of surrounding villages to form the city of Villingen-Schwenningen. Nevertheless, the two halves of the city are separated by a plateau and remain distinct.

Since 1904, Villingen-Schwenningen has also been home to the ice hockey team the Schwenninger Wild Wings which competes in the Deutsche Eishockey Liga.

Villingen-Schwenningen lies on the eastern edge of the Black Forest about 700 m (2,300 ft) above sea level. The source of the River Neckar is in Schwenningen (Schwenninger Moos).

Mayors and Lord mayors of Villingen

Mayors and Lord mayors of Schwenningen 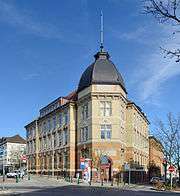