Vision of Disorder is an American hardcore punk band from Long Island that released three albums before disbanding in 2002. The band garnered attention for blending melody and groove into a traditional hardcore framework,[2] but its attempts to pursue an alternative metal direction on its third album met with limited commercial success.[3] The band reunited in 2008 and released The Cursed Remain Cursed in 2012.

Guitarists Matt Baumbach and Mike Kennedy formed the band in 1992 with vocalist/lyricist Tim Williams, drummer Brendon Cohen, and bassist Mike Fleischmann. Vision of Disorder released a series of demos and contributed to several compilations before releasing the Still EP in 1995 on Striving for Togetherness Records. The band appeared in the N.Y.H.C. documentary around the same time. Vision of Disorder gained attention for incorporating different styles into its hardcore framework.[4]

The band signed with Roadrunner Records' subsidiary, Supersoul, and released its eponymous full-length debut in 1996. The band was later praised for its impact upon the popularization of hardcore music: the debut album was "metallic hardcore that no one had heard, released for a mass audience on a big label. It had its merits; powerful, screamed vocals often layered over depressing clean vocals combined with fresh 'un-hardcore' guitar sections and unfamiliar drum patterns. For anyone into hardcore at the time, this was the album to have."[4]

Vision of Disorder's second album, Imprint, was released in 1998 on Roadrunner Records and featured guest vocals by Pantera's Phil Anselmo on the song "By The River".[2] The band was displeased with the raw production quality, which it attributed to the brief window for recording the album. Vision of Disorder also took issue with the purported lack of tour support by its record label.[2] The band and label severed their working relationship acrimoniously, as Williams recalls:

Three years ago we were on Roadrunner and Imprint had just come out maybe two, three months ago and they weren't pushing us or doing anything...Roadrunner said "We're yanking your tour support, come home and make another record". But we wanted to go out and support Imprint and just felt insulted that they said that. So we said "Something is going on here, we're getting the fuck off of this label"...We want[ed] to go back to being a hardcore band and playing weekends and they tried to offer us money and a better deal but we were like "Nope, see you".[5] 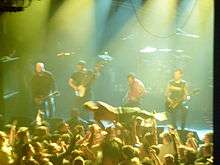 After the label strife, Vision of Disorder kept a relatively low profile. However, they eventually returned in 1999 with For the Bleeders, a set of nine re-recorded demo songs released on Go-Kart Records.

In 2001, Vision of Disorder released From Bliss to Devastation on TVT Records. The album marked a shift towards a traditional verse-chorus-verse songwriting structure. Kennedy described the album as "fitting in with the nu-metal scene"[5] while Williams praised the band's songwriting approach:

The songwriting is much more stuck to the classic boundaries of songwriting as far as a verse and chorus. Before we had no respect for songwriting and that was our style and we liked that. But now we are getting older and we want to be able to make music that you can just sit back hit play and listen to it.[5]

Reportedly frustrated by the lack of support from TVT, Vision of Disorder went on extended hiatus and eventually disbanded.[3] Williams and Kennedy formed the band Bloodsimple while Cohen and Fleischmann played in Karvnov.

Vision of Disorder reunited briefly in order to play three songs during a show with Bloodsimple and Karnov. The band played several one-off shows and shot footage for a DVD before formally reuniting in October 2008.[6] Williams described the material for the reunion album as similar to Imprint.[7] While the album was ultimately delayed several times, in July 2011, the first single, "The Enemy", was released on Candlelight Records. On September 18, 2012, The Cursed Remain Cursed was released.[8] The album was celebrated as "largely a return to the confrontational metallic hardcore that gave Imprint its cult following," although "some elements of From Bliss to Devastation...creep in on occasion".[9]