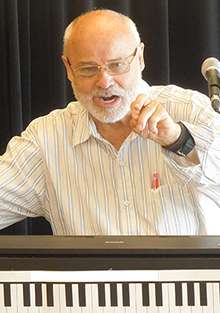 A vocal coach (also known as voice coach, though this term generally applies to those working with speech and communication rather than singing) is a music teacher who instructs singers on how to improve their singing technique, take care of and develop their voice, and prepare for the performance of a song or other work. Vocal coaches may give private music lessons or group workshops or masterclasses to singers. They may also coach singers who are rehearsing on stage, or who are singing during a recording session. Vocal coaches are used in both Classical music and in popular music styles such as rock and gospel. While some vocal coaches provide a range of instruction on singing techniques, others specialize in areas such as breathing techniques or diction and pronunciation.

A vocal coach is sometimes responsible for writing and producing vocal arrangements for four-part harmony for backup vocalists or helping to develop counter melodies for a secondary vocalist. Some vocal coaches may also advise singers or bands on lyric-writing for a music production. Some critics allege that in some cases where popular music recordings credit a singer for work as a vocal coach during a recording, this may be a subtle way of acknowledging a ghostwriting role in which the coach pens lyrics for a singer-songwriter or rapper.

In the 2000s, the increasing use of recording software which contains vocal processing algorithms and digital pitch correction devices is replacing some of the roles of the vocal coach. In the 1970s, if a producer wanted to record a single with a sports star with few vocal skills, the celebrity would need weeks of vocal coaching to learn their song and improve their tone and diction. In the 2000s, the vocals are often processed through time and pitch correction software instead in order to make their singing sound closer to that of a trained vocalist.

The training and education of vocal coaches varies widely. Many vocal coaches are former or current professional singers. Some vocal coaches have extensive formal training, such as a Bachelor of Music, a Master of Music, a Conservatory diploma, or degrees in related areas such as foreign languages or diplomas in human kinetics, posture techniques, or breathing methods. On the other hand, some vocal coaches may have little formal training, and so they rely on their extensive experience as a performer. While vocal coaches without formal training are mainly found in the popular music styles, they also exist in the Classical milieu. For example, a native German language speaker who moves to the US may begin providing German diction coaching to amateur vocal students, and over several decades, this vocal coach may develop a broad range of on-the-job experience in coaching German-language singing styles such as lieder and Wagnerian opera.

Vocal coaches may also come to their profession through other routes, such as related musical professions or from other fields. Some vocal coaches, for example, are rehearsal pianists with decades of experience accompanying singers, or former or current choral, music theater, or symphony conductors. More rarely, vocal coaches may come to the profession from a non-musical route. For example, a specialist in Alexander Technique, yoga, or medical aspects of the throat and vocal cords may begin to specialize in coaching and training singers.

The vocal coaching field is competitive, especially at the highest professional levels. Salaries vary greatly, as do the conditions of work. While a small number of top vocal coaches can command very high hourly or daily rates, most vocal coaches, like most other music and arts professionals, tend to have salaries which are below the average for other professions which require a similar amount of education and experience, such as economists or bank managers. The work conditions vary widely, from part-time or occasional freelance work for individual singers, opera companies, or record companies, to full-time contracts or multi-year jobs for universities (coaching vocal performance students and students in opera courses) or music theater companies.