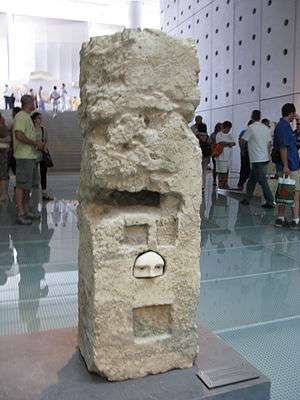 Part of a female face with inlaid eyes, Ancient Greek Votive offering, 4th century BC, probably by Praxias, set in a niche of a pillar in the sanctuary of Asclepios in Athens, Acropolis Museum, Athens 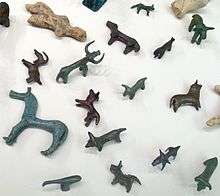 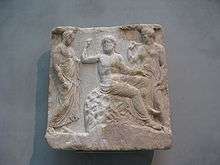 Ancient Greek votive relief, 400 BC. Asclepios is sitting on an omphalos between his wife Epione and a man clad in himation, Acropolis Museum, Athens 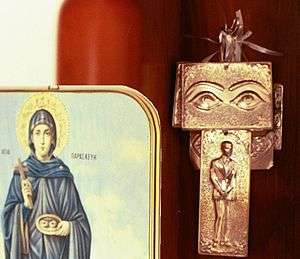 An icon of Saint Paraskevi with votive offerings hung beside it.[1] The saint holds a plate with two eyeballs on it. She is considered to be a healer of the blind. One of her visitors has left a votive offering (tama) depicting eyes to indicate what her affliction is.

Votive crown of the Visigoth King Recceswinth († 672), part of the Treasure of Guarrazar. Made of gold and precious stones in the second half of the 7th century. National Archaeological Museum of Spain (Madrid).

A votive deposit or votive offering is one or more objects displayed or deposited, without the intention of recovery or use, in a sacred place for broadly religious purposes. Such items are a feature of modern and ancient societies and are generally made in order to gain favor with supernatural forces. Some offerings have apparently been made in anticipation of the achievement of a particular wish, but in Western cultures from which documentary evidence survives it has been more typical to wait until the wish has been fulfilled before making the offering, for which the more specific term ex-voto may be used. Votive offerings have been described in historical Roman era and Greek sources, although similar acts continue into the present day, for example in traditional Catholic culture and, arguably, in the modern-day practice of tossing coins into a wishing well or fountain. The modern construction practice called topping out can be considered as an example of a votive practice that has very ancient roots.

In Europe, votive deposits are known from as early as the Neolithic, with polished axe hoards, reaching a peak in the late Bronze Age. High status artifacts such as armor and weaponry (mostly shields, swords, spears and arrows), fertility and cult symbols, coins, various treasures and animals (often dogs, oxen and in later periods horses) were common offerings in antiquity. The votive offerings were sacrificed and buried or more commonly cast into bodies of water or peat bogs, whence they could not possibly have been recovered. In certain cases entire ships have been sacrificed, as in the Danish bog Nydam Mose. Often all the objects in a ritual hoard are broken, possibly 'killing' the objects to put them even further beyond utilitarian use before deposition. The purposeful discarding of valuable items such as swords and spearheads is thought to have had ritual overtones. The items have since been discovered in rivers, lakes and present or former wetlands by construction workers, peat diggers, metal-detectorists, members of the public and archaeologists.

A saying by Diogenes of Sinope as quoted by Diogenes Laertius, indicates the high level of votive offering in Ancient Greece:[2]

The Treasuries at Olympia and Delphi (including the Athenian Treasury and Siphnian Treasury) were buildings by the various Greek city-states to hold their own votive offerings in money and precious metal; the sites also contained large quantities of votive sculptures, although these were clearly intended to glorify each city in view of its rivals as well as to give thanks to the gods.

Some archaeologists have recovered some votive offerings in ancient Sparta from the 5th century BC. These votive offerings give evidence to the presence of literacy in Spartan culture. Placing greater emphasis on inscriptions which seem to have been made by the individual making the offering, archaeologists can interpret that, of the early dedicators, there were very few in number and that most, if not all, were from the upper classes. One piece of pottery was found that may have had measurement signs on it. This would indicate an everyday literacy among the Spartans if this is true. Unfortunately, scholars have not recovered any other piece of pottery with a similar inscription to support that single find.

The 13 Ancient Votive Stones of Pesaro were unearthed in 1737 on a local Pesaro farm in the Province of Pesaro e Urbino, Italy, and date to pre-Estrucan times. They are inscribed with the names of various Roman gods such as APOLLO, MAT[ER]-MATVTA, SALVS, FIDE, and IVNONII (Juno).[3]

A curse tablet or defixio is a small sheet of tin or lead on which a message wishing misfortune upon someone else was inscribed. Usually found rolled up and deliberately deposited, there are five main reasons for dedicating a curse tablet:[4]

Of those in Britain the vast majority are of type 5. The two largest concentrations are from the sacred springs at Aquae Sulis, where 130 examples are recorded, and at Uley, where over 140 examples are visible. The use of the curse-tablet in seeking restoration of stolen property is strong evidence of invoking divine power through a non-traditional religious ceremony, often involving some form of water-deposition. The usual form of divine invocation was through prayer, sacrifice and altar dedication[5] so access to this information provides useful insights into Roman provincial culture.

Many unrecovered ancient votive offerings are threatened in today's world. Especially those submerged in wetlands and various bodies of water. Wetlands and bodies of water, often protect and preserve materials for thousands of years, because of their natural occurring anaerobic environment. But many seabeds have been disturbed, rivers and streams have been stretched out or re-routed in the landscape and many wetlands have been fully or partially drained or landfilled for various reasons in the last 100–200 years. Therefore many remaining objects are in danger of oxidation and eventual rapid deterioration. The leading causes of the disturbances being dredging, bottom trawling fishing boats, agricultural activities, peat cutting, groundwater extraction by water wells and establishments of larger infrastructural facilities like expressways, water treatment plants and in some instances large scale nature re-establishment projects. [6] [7]

When Solomon built the first temple he provided a number of furnishings above and beyond what had been commanded to Moses on Mount Sinai (see Temple of Solomon).

Oral tradition in Rabbinic Judaism also speaks of a huge golden grape vine artifact outside of the holy site of the Temple in Jerusalem before its destruction by the Romans.[8]

The tradition of votive offerings has been carried into Christianity in both the East and the West. The particular type of the votive crown, originally Byzantine, was also adopted in the West. 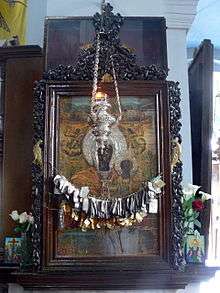 Tamata (votive offerings) left in front of an icon of the Black Madonna in Chania, Crete. 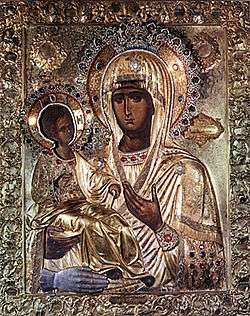 Wonderworking icon of the Theotokos, "The Three-handed" (Trojeručica); the third hand in silver is a votive offering in thanksgiving for a miracle.

According to Sacred Tradition, after Constantine the Great's conversion and subsequent victory at the Battle of the Milvian Bridge, he donated one of the crosses he carried in battle to the Church. This cross is reputed to be preserved on Mount Athos.

One of the most famous Orthodox votive offerings is that by Saint John of Damascus. According to tradition, while he was serving as Vizier to Caliph Al-Walid I, he was falsely accused of treachery and his hand was cut off. Upon praying in front of an icon of the Theotokos his hand was miraculously restored. In thanksgiving, he had a silver replica of his hand fashioned and attached it to the icon (see image at left). This icon, now called "Trojeručica" (The Three-handed) is preserved at Hilandar Monastery on Mount Athos.

Orthodox Christians continue to make votive offerings to this day, often in the form of tamata, metal plaques symbolizing the subject of their prayers. Other offerings include, candles, prosphora, wine, oil, or incense. In addition, many will leave something of personal value, such as jewelry, a pectoral cross or military decoration as a sign of devotion.

In the Roman Catholic Church offerings were made either to fulfill a vow made to God for deliverance, or a thing left to a Church in gratitude for some favor that was granted. Today votives can be lit votive candles, offered flowers, statues, vestments, and, monetary donations. Traditional special forms of votive offering ex votos include small silver models of the afflicted part of the body, inscribed stone tablets, folk art paintings of an incident of danger such as the votive paintings of Mexico, and model ships donated by sailors who have survived a dangerous voyage. Many Catholic churches still have areas where such offerings are displayed. Notre-Dame-des-Victoires, Paris, displays over 10,000, with a military specialization, and including many military decorations given by their recipients. The Votive Church, Vienna is a late example of many churches which are themselves votive offerings, in this case built to give thanks for a narrow escape from assassination by Emperor Franz Joseph I of Austria in 1853. 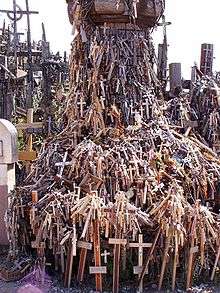