This article is about winning contests by default. For other uses, see Walkover (disambiguation). 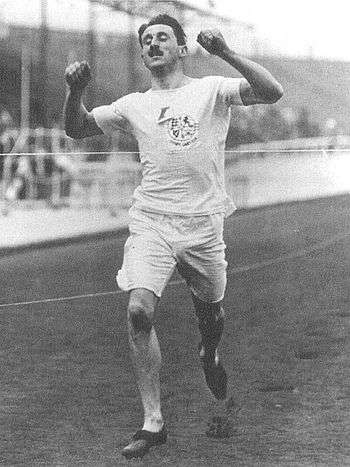 A walkover or W.O. (originally two words: "walk over") is the awarding of a victory to a contestant because there are no other contestants, or because the other contestants have been disqualified or have forfeited.[1] The term can apply in sport but can also apply to elections, also referred to as winning "by default". The word is used more generally by extension, particularly in politics, for a contest in which the winner is not the only participant but has little or no competition.[1] The strict and extended meanings of "walkover" as a single word are both found from 1829.[1]

The word originates from horseracing in the United Kingdom, where an entrant in a one-horse race run under Jockey Club rules has at least to "walk over" the course before being awarded victory.[2] This outcome was quite common at a time when there was no guaranteed prize money for horses finishing second or third so there was no incentive to run a horse in a race it could not win. The eighteenth century champion racehorse Eclipse was so dominant over his contemporaries that he was allowed to walk over on nine occasions,[3] and the 1828 Epsom Derby winner Cadland walked over on at least six occasions.

The term is also used in tennis, in reference to a player's unopposed victory as a result of the opponent's failing to start the match for any reason, such as injury.

The only Olympic Games walkover for a gold medal was at the 1908 Summer Olympics: Wyndham Halswelle won a rerun of the 400 m race as the three other athletes refused to take part in the rerun.

The only time it has happened at the FIFA World Cup was in the 1938 edition, when Austria was invaded and occupied by Germany just before the former was to play Sweden. After the England team declined to take Austria's entry, FIFA gave Sweden a walkover.

A walkover is usually the sign of a very strong mandate or unanimous support. It can, however, be interpreted by critics of the faction the walkover is awarded to as a suspicious sign of electoral fraud or gerrymandering to prevent other candidates from participating. The circumstances of such an interpretation are usually controversial. Walkovers can thus often be a sign of an illiberal democracy.

In civic organisations and civic societies, where personal charisma and personal politics often dominate, while parties or factions are often interested in a seat, they may not contest a seat that is being held by a long-standing or very popular individual, for fear of being seen as "rocking the boat". In elections for these societies, there is often "pre-election politics" where candidates attempt to figure out who is running for which positions; in this cat and mouse game, elected positions are thus often effectively decided by internal politics before a single vote is cast.

Many liberal democracies in history, including the United States, have had uncontested elections because support for one candidate was so strong. In the United States presidential elections of 1789 and 1792, George Washington ran uncontested for President, although in the latter election the ballot for the Vice President was contested by both Federalists and Democratic-Republicans. In the 1820 election, James Monroe also ran unopposed, though New Hampshire elector William Plumer cast a vote for John Quincy Adams as a symbolic measure.

Walkovers are called acclamation in Canada.

Running without opponents is not always a guarantee of winning. Many elections require that the winner has not only the most votes of all candidates but a defined fraction of all votes cast, or of the electorate. In this case electors may be able to cast a blank vote, spoil their papers, or abstain from voting, preventing the one candidate from winning and forcing a new election. In the Philippines, the sole candidate in an uncontested election must have at least one vote in order to win the seat.

In poker games that use blinds, a hand is considered a walkover (usually shortened to walk) when no other players call or raise the big blind, resulting in the player who posted the big blind winning the hand by default. Walks are most often seen in tournament play. Cash games often allow the players to "split the blinds" (i.e. take back their blind bets in case there are no callers or raisers by the time the action gets to the small blind), but this is usually not permitted in tournaments.