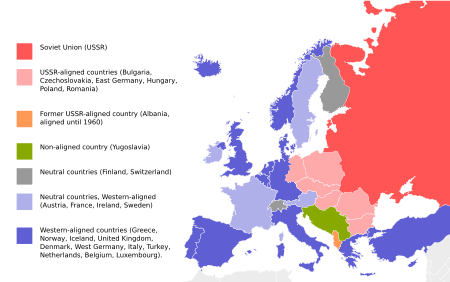 Political situation in Europe during the Cold War

The Western Bloc or Capitalist Bloc during the Cold War refers to the countries allied with the NATO against the Soviet Union and its allies. The latter were referred to as the Eastern Bloc, a more common term in English than Western Bloc. The governments and press of the Western Bloc were more inclined to refer to themselves as the Free World or the Western world. Western Europe is a controversial term used to refer to democratic countries in Europe during the Cold War, but the concept is sometimes still used for quick reference by the media.

Countries in the Western Bloc

Other countries that were backed, affiliated, supported or allied by Western powers: