Western Defense Command (WDC) was established on 17 March 1941 as the command formation of the U.S. Army responsible for coordinating the defense of the Pacific Coast region of the United States. A second major responsibility was the training of soldiers prior to their deployment overseas. The first Commanding General of WDC was Lieutenant General John L. DeWitt, who continued on in command of the Fourth U.S. Army. WDC headquarters were co-located at the existing Fourth Army headquarters at the Presidio of San Francisco. WDC's operational region covered the states of Washington, Oregon, California, Idaho, Montana, Nevada, Utah and Arizona. Until 1 November 1943, Alaska Defense Command was controlled through WDC. 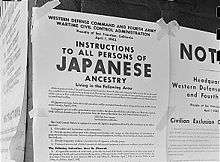 Photograph of the exclusion order issued by WDC and the Fourth U.S. Army on 1 April 1942 concerning all persons, including American citizens, of Japanese ancestry.

On 14 February 1942, Western Defense Command sent a memorandum to Secretary of War Henry Stimson recommending that "Japanese and other subversive elements" be removed from the West Coast region.[1] This led President Franklin D. Roosevelt to issue Executive Order 9066 on 19 February, which gave U.S. military commanders the authority to designate "military areas" and to then exclude any or all people from them. On 2 March 1942 General DeWitt issued a proclamation that designated the western halves of Washington, Oregon and California, and the southern third of Arizona to be military areas from which Americans of Japanese ancestry would be excluded. (The exclusion zone would later be expanded to include the entire state of California.)[2] Americans of German and Italian ancestry were also affected by restrictions and in some cases internment.

From June 1942 to August 1943, WDC was heavily involved in the planning and execution of the Aleutian Islands Campaign, which succeeded in expelling Japanese forces from their toehold in North America on the islands of Attu and Kiska. The operation to re-capture Kiska Island, Operation Cottage, involved both U.S. troops and a brigade of Canadian troops from Pacific Command.