"Whom" redirects here. For the radio station on Mount Washington, New Hampshire with the callsign resembling this word, see WHOM.

The pronoun who, in English, is an interrogative pronoun and a relative pronoun, used chiefly to refer to humans.

Its derived forms include whom, an objective form the use of which is now generally confined to formal English; the possessive form whose; and the emphatic form whoever (also whosoever and whom(so)ever; see also -ever).

The word who derives from the Old English hwā. The spelling who does not correspond to the word's pronunciation /huː/; it is the spelling that represents the expected outcome of hwā, while the pronunciation represents a divergent outcome – for details see Pronunciation of English ⟨wh⟩. The word is cognate with Latin quis and Greek ποιός.

The forms whom and whose derive respectively from the Old English dative and genitive forms of hwā, namely hwām and hwæs.

Who and its derived forms can be used as interrogative pronouns, to form questions:

The same forms (though not usually the emphatic ones) are used to make indirect questions:

The corresponding form when referring to non-humans is what (which has the emphatic form whatever, and no possessive form). Another similar interrogative is which – this can refer to either humans or non-humans, normally implying selection from a particular set, as either interrogative pronoun (Which do you prefer?) or interrogative determiner (adjective) (Which man should I choose?). What can also be used as a determiner (What book are you reading?), but who cannot.

Which, who, and what as interrogatives can be either singular or plural. (Examples: Which is the highest hill? Which are the highest hills? Who was born in 1920? Who were king and queen in 1920?). But who and what often take a singular verb regardless of any supposed number; the questions Who wants some cake? and What's in the bag? do not presuppose anything about number in possible responses: I want some cake, or All of us want some; and A rabbit is in the bag, or Five coins and a bus ticket.[1]

The other chief use of who and its derivatives are in the formation of relative clauses:

The corresponding form for non-humans is which, although whose can be used as a possessive in relative clauses even when referring to non-humans: I will have to fix the car whose engine I ruined.

In restrictive relative clauses, when not preceded by a preposition, both who(m) and which can be replaced by that, or (if not the subject of the clause) by zero. 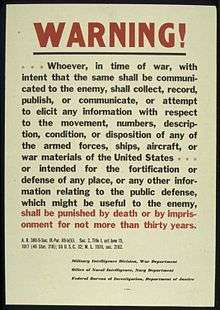 "WARNING - WHOEVER, IN TIME OF WAR"

Who and whom can also be used to form free relative clauses (those with no antecedent). The emphatic forms are often used for this purpose: I'll take who(ever) [formal: whom/whom(so)ever] you choose. This corresponds to the use of what(ever) when referring to non-humans. (For the choice between who(ever) and whom(ever) in formal English, see § Ambiguous cases below.)

The emphatic forms can also be used to make adverbial clauses, as in Whoever you choose, I'll be satisfied.

Tendency to replace whom with who

According to traditional prescriptive grammar, who is the subjective (nominative) form only, while whom is the corresponding objective form (just as him is the objective form corresponding to he). However it has long been common, particularly in informal English, for the uninflected form who to be used in both cases, thus replacing whom in the contexts where the latter was traditionally used.

In 1975, S. Potter noted, in Changing English, that "nearly half a century ago Edward Sapir predicted the demise of whom, showing at great length that it was doomed because it was 'psychologically isolated' from the objective pronouns me, us, him, her, them on the one hand, and the invariables which, what, that and where, when, how, why on the other."[3] By 1978 the who–whom distinction was identified as having "slipped so badly that [it is] almost totally uninformative".[4] According to the OED (2nd edition, 1989), whom is "no longer current in natural colloquial speech". Lasnik and Sobin argue that surviving occurrences of whom are not part of ordinary English grammar, but the result of extra-grammatical rules for producing "prestige" forms.[5]

According to Mair, the decline of whom has been speeded by the fact that it is one of relatively few synthetic (inflected) remnants in the principally analytical grammar of Modern English.[6] It has also been claimed that the decline of whom is more advanced in the interrogative case than in the relative case, this possibly being related to the degree of complexity of the syntax.[7]

However, some prescriptivists continue to defend whom as the only "correct" form in functions other than the subject.[8] Mair notes that: "whom is moribund as an element of the core grammar of English, but is very much alive as a style marker whose correct use is acquired in the educational system [, where it is taught]. [The use of whom] is highly restricted, but rather than disappear entirely, the form is likely to remain in use for some time to come because of its over prestige in writing."[9]

Whom is also sometimes used by way of hypercorrection, in places where it would not even be considered correct according to traditional rules, as in Whom do you think you are?[10] For more examples see the § Ambiguous cases section below.

Retention of the who–whom distinction often co-occurs with another stylistic marker of formal or "prestige" English – avoidance of the stranded preposition. This means that whom can frequently be found following a preposition, in cases where the usual informal equivalent would use who and place the preposition later in the sentence. For example:

In relative clauses, movement of the preposition further allows who to be replaced by that or the empty string:

In 1990 William Safire suggested: "The best rule for dealing with who vs. whom is this: Whenever whom is required, recast the sentence. This keeps a huge section of the hard disk of your mind available for baseball averages."[11]

Rules for usage of who and whom

In the types of English in which whom is used (which are generally the more formal varieties, as described in the section above), the general grammatical rule is that who is the subjective (nominative) form, analogous to the personal pronouns I, he, she, we, they, etc., while whom is the objective (oblique) form, analogous to me, him, her, us, them, etc. Thus who is used as a verb subject, while whom is used as an indirect or direct object of a verb or as the object (complement) of a preposition.

Use of who here is normal, and to replace it with whom would appear grammatically incorrect, since the pronoun is the subject of was, not the object of say. (One would write You say he [not him] was a great composer.) Nevertheless whom is quite commonly encountered, and even defended, in sentences of this type. It may arise from confusion with a form like:

In this case whom is used correctly according to the traditional rules, since it is now the object of the verb believe. (One would write You believe him [not he] (to be) a great composer.)

The use of whom in sentences of the first type (Beethoven, whom you say was a great composer...) – referred to as subject whom – can therefore be regarded as a hypercorrection, resulting from awareness of a perceived need to correct who to whom in sentences of the second type. However examples of this apparently ungrammatical usage can be found throughout the history of English. The OED traces it back to the 15th century, while Jespersen cites even earlier examples from Chaucer.[12] More examples are given below:

Doubts can also arise in the case of free relative clauses, formed with who(m), who(m)ever or who(m)soever. Modern guides to English usage say that the relative pronoun should take the case appropriate to their internal clause, not the function performed by that clause within an external clause.[14] For example, it is correct to write I’ll talk to whoever [not whomever] will listen, since whoever is the subject of will listen (regardless of the fact that the entire clause whoever will listen serves as the object of talk to). On the other hand, Whomever you choose will suit me is correct, since whomever is now the object of choose (despite the fact that the entire relative clause is the subject of will suit).[15]

In sentences of this type, however, as with the "subject whom" examples above, use of whom(ever) is sometimes found in places where it would not be expected grammatically, due to the relative complexity of the syntax. In fact in Middle English it was standard for the form of the pronoun to depend on the function in the external clause; the modern rule came about through re-analysis of the pronoun as primarily an element of the internal clause.[16]