William Leonard Laurence (March 7, 1888 – March 19, 1977) was a Jewish Lithuanian-born American journalist known for his science journalism writing of the 1940s and 1950s while working for The New York Times.[1] He won two Pulitzer Prizes and, as the official historian of the Manhattan Project, was the only journalist to witness the Trinity test and the atomic bombing of Nagasaki. He is credited with coining the iconic term "Atomic Age" which became popular in the 1950s.

Laurence was born Leib Wolf Siew in Salantai, a small city in the Russian Empire that is now in Lithuania. He emigrated to the United States in 1905, after participating in the Russian Revolution of 1905, and he soon changed his name, taking "William" after William Shakespeare, "Leonard" after Leonardo da Vinci, and "Lawrence" after a street he lived on in Roxbury, Massachusetts (but spelled with a "u" in reference to Friedrich Schiller's Laura). He attended college at Harvard University, Harvard Law School, and Boston University, and became a naturalized United States citizen in 1913. During World War I, he served with the U.S. Army Signal Corps, and in 1919 attended the University of Besançon in France.

In 1926 he began his career as a journalist, working for The World of New York City. In 1930 he began working at The New York Times, specializing where possible in reporting on scientific issues. He married Florence Davidow in 1931.

In 1934, Laurence co-founded the National Association of Science Writers, and in 1936 he covered the Harvard Tercenary Conference of Arts and Sciences, work for which he and four other science reporters received the 1937 Pulitzer Prize for Reporting.[2] 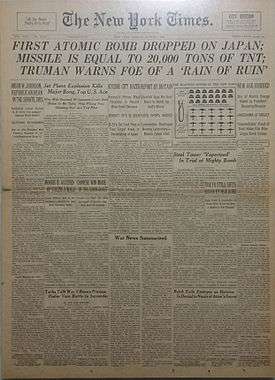 In May 1940, Laurence published a front-page exclusive in the New York Times on successful attempts in isolating uranium-235 which were reported in Physical Review, and outlined many (somewhat hyperbolic) claims about the possible future of nuclear power.[3] He had assembled it in part out of his own fear that Nazi Germany was attempting to develop atomic energy, and had hoped the article would galvanize a U.S. effort. Though his article had no effect on the U.S. bomb program, it was passed to the Soviet mineralogist Vladimir Vernadsky by his son, a professor of history at Yale University, and motivated Vernadsky to urge Soviet authorities to embark on their own atomic program and established one of the first commissions to formulate "a plan of measures which it would be necessary to realize in connection with the possibility of using intraatomic energy" (no full-scale atomic energy program began in the Soviet Union until after the war, however).[4]

In April 1945, Laurence was summoned to the secret Los Alamos laboratory in New Mexico by General Leslie Groves to serve as the official historian[5] of the Manhattan Project. In this capacity he was also the author of many of the first official press releases about nuclear weapons, including some delivered by the Department of War and President Harry S. Truman. He was the only journalist present at the Trinity test in July 1945, and beforehand prepared statements to be delivered in case the test ended in a disaster which killed those involved. As part of his work related to the Project, he also interviewed the airmen who flew on the mission to drop the atomic bomb on the city of Hiroshima, Japan. Laurence himself flew aboard the B-29 The Great Artiste, which served as a blast instrumentation aircraft, for the atomic bombing of Nagasaki. He visited the Test Able site at Bikini Atoll aboard the press ship, 'Appalachian', for the bomb test on July 1, 1946.[6]

For his 1945 coverage of the atomic bomb, beginning with the eyewitness account from Nagasaki, he won a second Pulitzer Prize for Reporting in 1946.[2] At the office of the Times he was thereafter referred to as "Atomic Bill", to differentiate him from William H. Lawrence, a political reporter at the newspaper.

In his autobiography, Richard Feynman mentioned William Laurence standing next to him during the Trinity test. Feynman stated, "I had been the one who was supposed to have taken him around. Then it was found that it was too technical for him, and so later H.D. Smyth came and I showed him around."[7]

In 1946, he published an account of the Trinity test as Dawn Over Zero, which went through at least two revisions. He continued to work at the Times through the 1940s and into the 1950s, and published a book on defense against nuclear war in 1950. In 1951, his book The Hell Bomb warned about the use of a cobalt bomb – a form of hydrogen bomb (still an untested device at the time he wrote it) engineered to produce a maximum amount of nuclear fallout.

In 1956, he was present at the testing of a hydrogen bomb at the Pacific Proving Grounds. That same year, he also became appointed Science Editor of the New York Times, succeeding Waldemar Kaempffert. He served in this capacity until he retired in 1964.

Laurence died in 1977 in Majorca, Spain, of complications from a blood clot in his brain.[1]

Call for revocation of 1946 Pulitzer Prize

In 2004, journalists Amy Goodman and David Goodman called for the Pulitzer Board to strip Laurence and his paper, The New York Times, of his 1946 Pulitzer Prize.[8] The journalists argued that at the time Laurence "was also on the payroll of War Department"[9] and that, after the atomic bombings, he “had a front-page story in the Times[10] disputing the notion that radiation sickness was killing people."[5] They concluded that "his faithful parroting of the government line was crucial in launching a half-century of silence about the deadly lingering effects of the bomb".[11][12]

In their 1995 book Hiroshima in America: Fifty Years of Denial, Robert Jay Lifton and Greg Mitchell assert, "Here was the nation's leading science reporter, severely compromised, not only unable but disinclined to reveal all he knew about the potential hazards of the most important scientific discovery of his time."[13]

Laurence denied that the black rain fallout in Hiroshima was significantly radioactive because it originated from the firestorm that began 30 minutes after explosion, when the radioactive mushroom cloud had been blown many miles downwind.