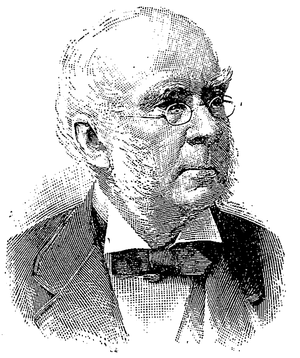 Smith was born in Enfield in 1813 of Nonconformist parents. He attended the Madras House school of John Allen in Hackney.[2] Originally destined for a theological career, he instead was articled to a solicitor. In his spare time he taught himself classics, and when he entered University College London he carried off both the Greek and Latin prizes. He was entered at Gray's Inn in 1830, but gave up his legal studies for a post at University College School and began to write on classical subjects.

In 1867, he became editor of the Quarterly Review, a post he held until his death.

Meanwhile, he published the first of several school dictionaries in 1850, and in 1853 he began the Principia series, which marked an advance in the school teaching of Greek and Latin. Then came the Student's Manuals of History and Literature, of which the English literature volume went into 13 editions.[4] He himself wrote the Greek history volume. He was joined in the venture by the publisher John Murray when the original publishing partner met difficulties.

Murray was the publisher of the 1214-page Latin–English Dictionary based upon the works of Forcellini and Freund that Smith completed in 1855. This was periodically reissued over the next thirty-five years. It goes beyond "classical" (100 BC-AD 100) Latin to include many entries not found in other dictionaries of the period, including Lewis and Short.[5]

The Atlas, on which Sir George Grove collaborated, appeared in 1875.[6] From 1853 to 1869 Smith was classical examiner to the University of London, and on his retirement he became a member of the Senate. He sat on the Committee to inquire into questions of copyright, and was for several years registrar of the Royal Literary Fund. He edited Gibbon, with Guizot's and Milman's notes, in 1854–1855.

Smith was created a DCL by Oxford and Dublin, and the honour of a knighthood was conferred on him in 1892. He died on 7 October 1893 in London.[7]