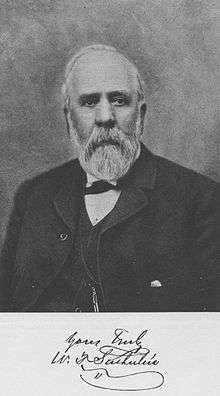 William Thomas Sutherlin (1822 – 1893) was a 19th-century tobacco planter, entrepreneur and industrialist, and politician. He is most noted for offering his Danville, Virginia, plantation home as a temporary residence for President of the Confederate States of America Jefferson Davis and his Cabinet from April 3 – April 10, 1865, the week before Gen. Robert E. Lee surrendered the Army of Northern Virginia at Appomattox Courthouse.

Sutherlin was significant to the state's economy: he was the first in Virginia to apply steam power to hydraulic tobacco presses, and developed the second-largest tobacco factory in the state. He also founded and served as first president of the Bank of Danville, and served 6 years as mayor of Danville. In 1871 he was elected to the state legislature, serving one term.

A planter, William T. Sutherlin also developed as an entrepreneur and industrialist. He developed ways to improve the process of preparing the region's bright leaf tobacco for market, as there was great demand for this commodity. Before the Civil War, Sutherlin was the first Virginian to apply steam power to hydraulic tobacco presses; he owned and operated the second-largest tobacco factory in the state. Sutherlin also founded and served as the first president of the Bank of Danville. In 1855, Sutherlin was elected as Danville's mayor and served for 6 years in this capacity.

Sutherlin resigned as mayor after he was elected to be a delegate to the Virginia Convention of 1861, which was to take up the issue of secession. Sutherlin was opposed to secession until Fort Sumter was fired upon on April 12, 1861.

In his 40s and with poor health, Sutherlin could not serve in the active military. He was appointed as Quartermaster of Danville and rose to the rank of major. His duties included oversight of food, medicine, and arms supply, as Danville served as a primary supply depot and arsenal of the Confederacy. Major Sutherlin also allowed his tobacco factory to be used as a prison for captured Union soldiers. 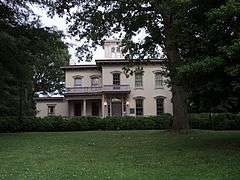 William T. Sutherlin Mansion, Danville, Virginia. Built for Sutherlin in 1859, the home became famous as the temporary residence of Jefferson Davis, President of the Confederate States of America

Due to the Union invasion of Richmond, Virginia, on April 3, 1865, Confederate President Jefferson Davis and his cabinet fled south on the Richmond and Danville Railroad for Danville. Sutherlin opened his home to the beleaguered executive and his cabinet as a temporary residence until April 10.[1] Here Davis wrote and signed his last official proclamation as President of the Confederacy, dissolving the government, before continuing south to Greensboro, North Carolina.[2]

After the war, Sutherlin continued to cultivate his plantation and pursue business ventures. In 1871 he was elected to the Virginia General Assembly, where he served for two years.