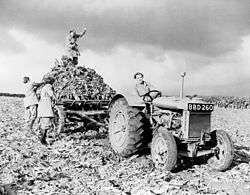 Members of the British Women's Land Army harvesting beetroot, 1942 or 1943

In effect the Land Army operated to place women with farms that needed workers, the farmers being their employers. 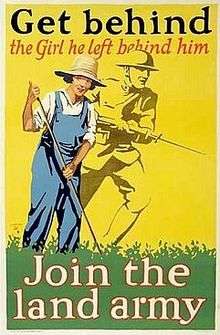 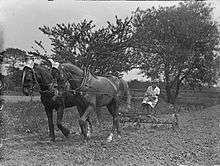 Working on a potato crop during World War I 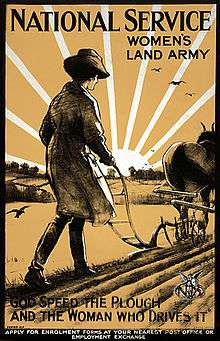 World War One recruitment poster for the Women's Land Army

The Board of Agriculture organised the Land Army during the Great War, starting activities in 1915. Towards the end of 1917 there were over 250,000 - 260,000 women working as farm labourers, with 23,000 in the Land Army itself, doing chores such as milking cows and picking fruit.

3 million men away to fight in the First World War Britain was struggling for labour. The government wanted women to get more involved in the production of food and do their part to support the war effort. This was the beginning of the Women’s Land Army. Many traditional farmers were against this so the board of trade sent agricultural organisers to speak with farmers to encourage them to accept women’s work on the farms. One goal was to attract middle-class women who would act as models for patriotic engagement in nontraditional duties. However the uniform of the Women's Land Army included trousers, which many at the time considered cross-dressing. The government responded with rhetoric that explicitly feminised the new roles.[1]

As the prospect of war became increasingly likely, the government wanted to increase the amount of food grown within Britain. In order to grow more food, more help was needed on the farms and so the government started the Women's Land Army in June 1939.

The majority of the Land Girls already lived in the countryside but more than a third came from London and the industrial cities of the north of England.

In the Second World War, though under the Ministry of Agriculture and Fisheries, it was given an honorary head - Lady Gertrude Denman. At first it asked for volunteers. This was supplemented by conscription, so that by 1944 it had over 80,000 members. The WLA lasted until its official disbandment on 21 October 1949. Land girls were formed to supply New Zealand's agriculture during the war. City girls from the age of 17 and up were sent to assist on sheep, cattle, dairy, orchard and poultry properties.

The Women's Land Army was the subject of:

It also figured largely in:

During the First World War period a Good Service Ribbon was awarded to eligible women.[2] 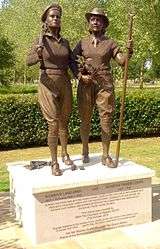 In December 2007, the Department for Environment, Food and Rural Affairs (DEFRA) announced that the efforts of the Women's Land Army and the Women's Timber Corps would be formally recognised with the presentation of a specially designed commemorative badge to the surviving members. The badge of honour was awarded in July 2008 to over 45,000 former Land Girls.[3]

In October 2014, a memorial statue to both the Women's Land Army and the Women's Timber Corps was formally unveiled at the National Memorial Arboretum in Alrewas, Staffordshire.[4]