As established by the executive order, the Working Group has three purposes and functions.

(a) Recognizing the goals of enhancing the integrity, efficiency, orderliness, and competitiveness of our Nation's financial markets and maintaining investor confidence, the Working Group shall identify and consider:

(1) the major issues raised by the numerous studies on the events in the financial markets surrounding October 19, 1987†, and any of those recommendations that have the potential to achieve the goals noted above; and
(2) the actions, including governmental actions under existing laws and regulations (such as policy coordination and contingency planning), that are appropriate to carry out these recommendations.

(b) The Working Group shall consult, as appropriate, with representatives of the various exchanges, clearinghouses, self-regulatory bodies, and with major market participants to determine private sector solutions wherever possible. (c) The Working Group shall report to the President initially within 60 days (and periodically thereafter) on its progress and, if appropriate, its views on any recommended legislative changes.[1][2]

The Working Group consists of:

"Plunge Protection Team" was originally the headline for an article in The Washington Post on February 23, 1997,[3] and has since become a colloquial term used by some mainstream publications to refer to the Working Group.[4][5] Initially, the term was used to express the opinion that the Working Group was being used to prop up the stock markets during downturns.[6][7] Financial writers for British newspapers The Observer and The Daily Telegraph, along with U.S. Congressman Ron Paul, writers Kevin Phillips (who claims “no personal firsthand knowledge”)[8] and John Crudele,[9] have charged the Working Group with going beyond their legal mandate. Charles Biderman, head of TrimTabs Investment Research, which tracks money flow in the equities market, suspected that following the 2008 financial crisis the Federal Reserve or U.S. government was supporting the stock market. He stated that "If the money to boost stock prices did not come from the traditional players, it had to have come from somewhere else” and "Why not support the stock market as well? Moreover, several officials have suggested the government should support stock prices."[10]

Claims about the Working Group generally propose that it is an orchestrated mechanism that attempts to manipulate U.S. stock markets in the event of a market crash by using government funds to buy stocks, or other instruments such as stock index futures—acts which are forbidden by law. In August 2005, Sprott Asset Management released a report that argued that there is little doubt that the PPT intervened to protect the stock market.[11] However, these articles usually refer to the Working Group using moral suasion to attempt to convince banks to buy stock index futures.[12]

Former Federal Reserve Board member Robert Heller, in the Wall Street Journal, opined that "Instead of flooding the entire economy with liquidity, and thereby increasing the danger of inflation, the Fed could support the stock market directly by buying market averages in the futures market, thereby stabilizing the market as a whole." His statement has been used to claim that the Fed actually did act in that way. Some mainstream analysts call those claims a conspiracy theory, explaining that such claims are simplistic and unworkable.[13] Author Kevin Phillips wrote in his 2008 book Bad Money that while he had no interest "in becoming a conspiracy investigator", he nevertheless drew the conclusion that "some kind of high-level decision seems to have been reached in Washington to loosely institutionalize a rescue mechanism for the stock market akin to that pursued...to safeguard major U.S. banks from exposure to domestic and foreign loan and currency crises."[14] Phillips infers that the simplest way for the Working Group to intervene in market plunges would be through buying stock market index futures contracts, either in cooperation with major banks or through trading desks at the U.S. Treasury or Federal Reserve.[14]

On October 6, 2008, the working group issued a statement indicating that it was taking multiple actions available to it in order to attempt to stabilize the financial system, although purchase of stock shares was not part of the statement.[15] The government may wind up owning shares in the firms to which it provided loans, as they will receive warrants as collateral for these loans. 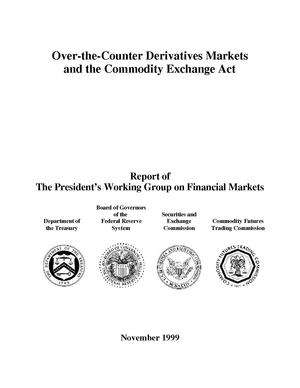 Example of a PWG report, from 1999
This article is issued from Wikipedia - version of the 11/13/2016. The text is available under the Creative Commons Attribution/Share Alike but additional terms may apply for the media files.