Wynton Learson Marsalis (born October 18, 1961) is a trumpeter, composer, teacher, music educator, and artistic director of Jazz at Lincoln Center in New York City, United States. Marsalis has promoted the appreciation of classical and jazz music often to young audiences. Marsalis has been awarded nine Grammys in both genres, and his Blood on the Fields was the first jazz composition to win the Pulitzer Prize for Music. Marsalis is the son of jazz musician Ellis Marsalis, Jr. (pianist), grandson of Ellis Marsalis, Sr., and brother of Branford (saxophonist), Delfeayo (trombonist), and Jason (drummer). Marsalis performed the national anthem at Super Bowl XX in 1986.

Marsalis graduated from Benjamin Franklin High School with a 3.98 GPA.[2] At age 17, he was the youngest musician admitted to Tanglewood's Berkshire Music Center, where he won the school's Harvey Shapiro Award for outstanding brass student. He moved to New York City to attend Juilliard in 1979, and picked up gigs around town. During this period, Marsalis received a grant from the National Endowment of the Arts to spend time and study with trumpet innovator Woody Shaw, one of Marsalis' major influences at the time. In 1980, he joined the Jazz Messengers led by Art Blakey. In the years that followed, Marsalis performed with Sarah Vaughan, Dizzy Gillespie, Sweets Edison, Clark Terry, Sonny Rollins, Ron Carter, Herbie Hancock, Tony Williams and countless other jazz musicians.

In 1995, PBS premiered Marsalis on Music, an educational television series on jazz and classical music hosted and written by Marsalis. Also, in 1995, National Public Radio aired the first of Marsalis' 26-week series, entitled Making the Music. His radio and television series were awarded the George Foster Peabody Award. Marsalis has also written five books: Sweet Swing Blues on the Road, Jazz in the Bittersweet Blues of Life, To a Young Musician: Letters from the Road, Jazz ABZ (an A to Z collection of poems celebrating jazz greats), and his most recent release Moving to Higher Ground: How Jazz Can Change Your Life. There is a Language Arts study guide available for Moving to Higher Ground: How Jazz Can Change Your Life for high school English teachers who desire to integrate the arts into their classrooms. It is aligned to the Common Core State Standards and has audio and visual supplemental materials.

Marsalis at the Lincoln Center in 2004

In December 2011, Marsalis was named cultural correspondent for the new CBS This Morning.[4] Wynton Marsalis is a member of the CuriosityStream Advisory Board. [5] 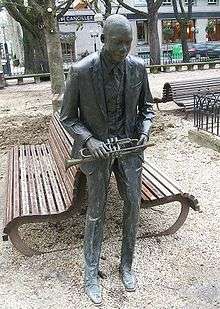 Honorary degrees Marsalis has received include those conferred by New York University,[6] Columbia, Harvard, Howard, the State University of New York, Princeton, University of Vermont and Yale. Marsalis was honored with the Louis Armstrong Memorial Medal and the Algur H. Meadows Award for Excellence in the Arts. He was inducted into the American Academy of Achievement, and was dubbed an Honorary Dreamer by the I Have a Dream Foundation. The New York Urban League awarded Marsalis with the Frederick Douglass Medallion for distinguished leadership and the American Arts Council presented him with the Arts Education Award.

Time magazine's list of promising Americans under the age 40 selected Marsalis in 1995, and in 1996, Time celebrated Marsalis as one of America's 25 most influential people. In November 2005, Marsalis received the National Medal of Arts. United Nations Secretary-General Kofi Annan proclaimed Marsalis an international ambassador of goodwill for the United States by appointing him a UN Messenger of Peace (2001).

In 1997, Marsalis became the first jazz musician ever to win the Pulitzer Prize for Music for his epic oratorio, Blood on the Fields. In a personal note to Marsalis, Zarin Mehta wrote, "I was not surprised at your winning the Pulitzer Prize for Blood on the Fields. It is a broad, beautifully painted canvas that impresses and inspires. It speaks to us all ... I'm sure that, somewhere in the firmament, Buddy Bolden, Louis Armstrong and legions of others are smiling down on you."[7]

Marsalis won the Netherlands' Edison Award and the Grand Prix du Disque of France. The Mayor of Vitoria, Spain, awarded him the city's Gold Medal – its most coveted distinction. In 1996, Britain's senior conservatoire, the Royal Academy of Music, made Marsalis an honorary member, the Academy's highest decoration for a non-British citizen. The city of Marciac, France, erected a bronze statue in his honor. The French Ministry of Culture appointed Marsalis the rank of Knight in the Order of Arts and Literature, and in the fall of 2009, Marsalis received France's highest distinction, the insignia Chevalier of the Legion of Honour, an honor that was first awarded by Napoleon Bonaparte.[8]

Marsalis, with Julyssa Almanza and Valerie Almanza, were group recipients of the 2011 NEA Jazz Masters Award.[9]

Marsalis has toured 30 countries on every continent except Antarctica, and nearly five million copies of his recordings have been sold worldwide. 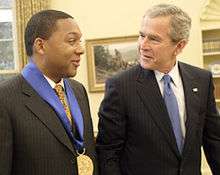 Marsalis receiving the National Medal of Arts from President George W. Bush in 2005 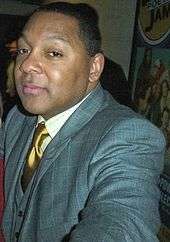 Jazz critic Scott Yanow regards Marsalis as talented but has criticized his "selective knowledge of jazz history" and has said that he feels the fact that Marsalis considers "post-1965 avant-garde playing to be outside of jazz and 1970s fusion to be barren" to be the unfortunate result of the "somewhat eccentric beliefs of Stanley Crouch".[11] Bassist Stanley Clarke said "All the guys that are criticizing—like Wynton Marsalis and those guys—I would hate to be around to hear those guys playing on top of a groove!" Mr. Clarke also admitted, "These things I've said about Wynton are my criticism of him, but the positive things I have to say about him outweigh the negative. He has brought respectability back to Jazz" [12]