Yonhap News Agency is South Korea's largest news agency. It is a publicly funded company, based in Seoul, South Korea. Yonhap provides news articles, pictures and other information to newspapers, TV networks and other media in South Korea. 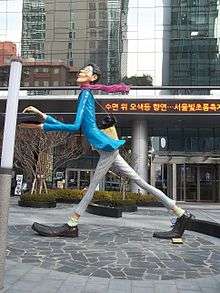 Yonhap (meaning "united" in Korean) was established on December 19, 1980, through the merger of Hapdong News Agency and Orient Press. It maintains various agreements with 78 non-Korean news agencies, and also has a services-exchange agreement with North Korea's Korean Central News Agency (KCNA) agency, signed in 2002.[1] It is the only Korean wire service that works with foreign news agencies,[2] and provides a limited, but freely available, selection of news on its website in Korean, English, Chinese, Japanese, Spanish, Arabic and French.

Yonhap was the host news agency of the 1988 Seoul Summer Olympics, and was elected twice to the board of the Organization of Asia-Pacific News Agencies (OANA).

Yonhap is South Korea's only news agency large enough to have more than 60 correspondents abroad and 580 reporters across the nation.[1] Its largest shareholder is the Korea News Agency Commission (KONAC).

In 2003, the South Korean government passed a law giving financial and systematic assistance to the agency, to reinforce staff and provide equipment.[2] In the legislation, it was also been given the role of “promoting the country's image” to an international audience.[1] The head of the Yonhap agency is usually affiliated with the government, which critics say harms press freedom and influences news-gathering. However. it is government affiliation, rather than press laws (which are supportive of press freedom), which is said to be the cause of any limitations,[3] though the agency does criticise the government.[4] 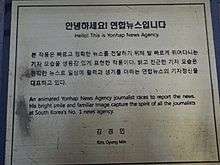 Yonhap employs about 580 reporters, the largest number after the Korean Broadcasting System (KBS) at home. It claims to have more than 60 correspondents in 35 countries, producing the greatest amount of foreign dispatches among Korean media.[1] Yonhap is one of few Korean news organizations with a section specialized in North Korea reports. In 1998, Yonhap acquired from the National Intelligence Service a news wire service monitoring North Korean media and analyzing North-Korea-related information. Yonhap incorporated the firm and its staff into the newsroom, creating a special division (often referred to as the 'N.K. news desk') to improve its reporting on North Korea. In January 2009, two reporters from the N.K. news desk disclosed that Kim Jong-un had been chosen as heir apparent to North Korea's longtime leader, Kim Jong Il. Later, in 2010, the reporters won the grand journalism award for the exclusive story from the Korean Journalist Association. It was the first time in nine years that the association had awarded the prize.[5]

The Korean Journalist Association in 2010 established the Cho Gye-chang Journalism Award for achievement in international news reporting to commemorate Mr. Cho Gye-chang, the former Yonhap correspondent in Shenyang, China.[6] Mr. Cho was killed in a car crash in December 2008 on the way back, after having conducted an interview with a Korean-Chinese academic. He was assigned to Shenyang in 2006 as the first South Korean correspondent in the northern Chinese city. Mr. Cho was widely admired as an ardent news writer who focused on North Korean affairs and Korean-Chinese communities. On the first anniversary of his demise, Korean-Chinese organizations and local journalists paid tribute to him as a "truly hardworking reporter with great professionalism".[7] Mr. Cho's death marked the first time that Yonhap had lost a reporter on an international assignment.