You Have Seen Their Faces 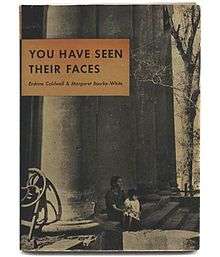 You Have Seen Their Faces is a book by photographer Margaret Bourke-White and novelist Erskine Caldwell. It was first published in 1937 by Viking Press, with a paperback version by Modern Age Books following quickly. Bourke-White and Caldwell married in 1939.[1]

For this pictorial survey about rural American South and its troubles, Bronx-born Bourke-White took the pictures, while Georgia-born Caldwell wrote the text. Together, they both wrote captions:

Bourke-White lay in wait for her subjects with a flash, and wrote with pleasure of having them “imprisoned on a sheet of film before they knew what had happened.” The resulting portraits are by turns sentimental and grotesque, and she and Caldwell printed them with contrived first-person captions.[2]

The book's title is reminiscent of two short stories by Whittaker Chambers in The New Masses: "You Can Make Out Their Voices" (March 1931) and "You Have Seen the Heads" (April 1931). The former story Hallie Flanagan (later director of the WPA's Federal Theatre Project) made into a popular play under the title "Can You Hear Their Voices?"