He is co-founder and chairman of United For Change[13] since 2009. This effort through modern discourse, is to create awareness of the broadest and most consuming topics within the Muslim and interfaith community. The aim is to leverage the diversity through cooperation and goodwill and address the obstacles that have proven to be divisive.[14] In 2015, he signed the official Memorandum of Understanding between Zaytuna College and Hartford Seminary in Connecticut.[15]

The Chronicle of Higher Education stated, "Embodying an American story if ever there was one—including proverbial bootstraps, military service, political activism, and deep religious commitment—Zaid Shakir’s message of social justice in the face of poverty and racism he has known first hand makes him endlessly and, it often seems, effortlessly relevant. He is as approachable a man as I’ve ever met." [16] He is one of the signatories[17] of A Common Word Between Us and You, an open letter by Islamic scholars to Christian leaders, calling for peace and understanding. Imam Zaid is a signatory along with religious and spiritual Leaders from around the world who presented the UN Secretary General with a declaration[18] in support of the Paris Climate Agreement under the United Nations Framework Convention on Climate Change, marking the largest number of nations ever signing an international agreement.[19]

Shakir was Born 1956[6] in Berkeley, California as Ricky Daryl Mitchell to a family descended from African, Irish and Native American[7] roots. His formative years were spent in housing projects in New Britain Connecticut. These early experiences instilled in him a compassionate and realistic work ethic, as well as, an unshakeable desire for social change and economic justice. He converted to Islam in 1977 while serving in the United States Air Force and shortly after changed his name to Zaid Salim Shakir.[7]

A summa cum laude graduate, he obtained a BA in International Relations at American University in Washington, D.C., earned his MA in Political Science at Rutgers University.[4] He then left for Syria to pursue his studies in the traditional Islamic Sciences.[4] For seven years in Syria, and briefly in Morocco, he immersed himself in an intense study of Arabic, Islamic law, Quranic studies, and spirituality with some of the top Islamic scholars of our age, such as Sheikh ʿAbd al-Raḥmān al-Shāghūrī[20] and Sheikh Mustafa Al-Turkmani. In 2001, he was the first American male graduate from Syria's Abu Nour University[4] with a BA in Islamic Sciences.

Recent work in the United States

In 2003, as a scholar-in-residence at Zaytuna Institute located in California, Shakir began to teach Arabic, Law, and Islamic spirituality. In 2004, he initiated a pilot seminary program at Zaytuna Institute, which was useful in Zaytuna College’s refinement of its Islamic Studies curriculum and its educational philosophy. For four years, students in the pilot program were engaged in the study of contemporary and classical texts. And, in the fall of 2010, he and his colleagues co-founded the Berkeley, California based Zaytuna College, a four-year Muslim liberal arts college, the first of its kind in the United States,[21] dedicated to "educate and prepare morally committed professional, intellectual, and spiritual leaders", who are grounded in the Islamic scholarly tradition and conversant with the cultural currents and critical ideas shaping modern society.

According to The New York Times, Zaid Shakir is one of nine influential Muslim scholars who has appeared in a YouTube video denouncing militant Islam."[22][23] The aftermath of 911 Shakir states, "People all over the world have felt the repercussions and the reprisals for the senseless brutality of 9/11’s perpetrators. Our best hope is to attempt to move beyond the pain, strife and hatred unleashed. Trusting in the power and promise of God we will be able to do just that." [24]

Shakir states in Scapegoats: How Islamophobia Helps Our Enemies & Threatens Our Freedoms, “Sharia forbids members of a Muslim minority [in Western societies] from engaging in clandestine acts of violence and paramilitary organizing… or from acting as political or military agents for a Muslim-majority country. Islamic law also forbids the disruption of public safety, many of the practices that the average person fearfully associates with some Muslims today, like killing innocent people (non-Muslims and Muslims alike) and stoning women."[25] 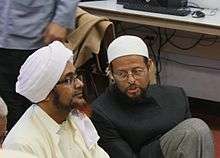 The New York Times describes him as "a leading intellectual light" whilst adding that he has "a history of anti-American rhetoric" that has mellowed over the years.[28]

Tikkun Daily states that he is "one of the most thoughtful and dynamic teachers about the true nature of Islam in America today".[29]

Books which include his foreword or note