Ziff Davis, LLC is an American publisher and Internet company. It was initiated during 1927 in Chicago, Illinois, by William B. Ziff, Sr. and Bernard G. Davis.

Throughout most of Ziff Davis' history, it was a publisher of hobbyist magazines, often ones devoted to expensive, advertiser-rich technical hobbies such as cars, photography, and electronics. However, since 1980, Ziff Davis has primarily published computer-related magazines, and its websites, derived from its magazines, have established Ziff Davis as an internet information company.

Ziff Davis had several broadcasting properties, first during the mid-1970s, and later with its own technology network ZDTV, later renamed to TechTV, that was sold to Vulcan Ventures during 2001. Ziff Davis' magazine publishing and internet operations offices are based in New York City, Massachusetts, and San Francisco.

On January 6, 2009, the company sold 1UP.com to UGO Entertainment, a division of Hearst Corporation and announced the January 2009 issue of the long-running Electronic Gaming Monthly magazine as the final one.[1]

On November 12, 2012, Ziff Davis Inc., was acquired by cloud computing services company j2 Global of Hollywood, Calif. for $167 million cash.[3] According to a late 2015 Fortune article, Ziff Davis comprises 30% of parent company j2 Global's $600 million annual revenue (2014) and is increasing 15% to 20% each year. Analyst Gregory Burns of Sidoti & Company calculates that Ziff Davis is worth $1.9 billion.[4] 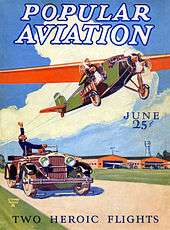 An early (June 1928) issue of Popular Aviation; the first magazine published by Ziff Davis. The covers were paintings for the first decade.

The William B. Ziff Company, founded during 1920, was a successful Chicago advertising agency that secured advertising from national companies such as Procter & Gamble for virtually all African American weekly newspapers. During 1923, Ziff acquired E. C. Auld Company, a Chicago publishing house. Ziff's first venture in magazine publishing was Ziff's Magazine, which featured short stories, one-act plays, humorous verse, and jokes. The title was changed to America's Humor during April 1926.[5][6]

Bernard George Davis was the student editor of the University of Pittsburgh's humor magazine, the Pitt Panther, and was active in the Association of College Comics of the East. During his senior year he attended the association's convention and met William B. Ziff. When Davis graduated during 1927 he joined Ziff as the editor of America's Humor.[7][8]

Ziff, who had been an aviator in World War I, created a new magazine, Popular Aviation, during August 1927 that was published by Popular Aviation Publishing Company of Chicago, Illinois. Managed by Editor Harley W. Mitchell it became the largest aviation magazine, with a circulation of 100,000 during 1929.[9] The magazine's title became Aeronautics for June 1929 and the publishing company's name became Aeronautical Publications, Inc. The title was changed back to Popular Aviation for July 1930. The magazine became Flying during 1942 and is still published today by the Bonnier Corporation. The magazine celebrated its 80th anniversary during 2007.

The company histories normally give the founding date as 1927. This is when B.G. Davis joined and Popular Aviation magazine started. However, it was not until 1936 that the company became the "Ziff-Davis Publishing Company". (Popular Aviation, April 1936, was the first issue by Ziff-Davis Publishing.) Davis was given a substantial minority equity interest in the company and was appointed a vice-president and director. He was later named president during 1946. Davis was a photography enthusiast and the editor of the Popular Photography magazine started during May 1937.[8]

During early 1938, Ziff-Davis acquired the magazines Radio News and Amazing Stories.[10] These were started by Hugo Gernsback but sold as a result of the Experimenter Publishing bankruptcy during 1929. Both magazines had declined since the bankruptcy but the resources of Ziff-Davis rejuvenated them starting with the issue April 1938. Radio News was published until 1972. During 1955 the magazine Popular Electronics, derived from Radio News, was begun and published until 1985. Amazing Stories was a major science fiction magazine and Ziff Davis soon added a new companion, Fantastic Adventures (FA). During 1954 FA was merged into the newer magazine Fantastic, founded during 1952 to great initial success. ZD published a number of other pulp magazines and, later, digest-sized fiction magazines during the 1940s and 1950s, and continued to publish Amazing and Fantastic until 1965.

William B. Ziff, Sr., died during 1953 and son William B. Ziff, Jr. returned from Germany to assume his role in the company. During 1958 Bernard G. Davis sold his share of Ziff Davis to found Davis Publications, although Ziff-Davis continued to use his surname. With the younger Ziff's direction, ZD soon became a successful publisher of enthusiast magazines. Ziff Davis purchased titles like Car And Driver and by intending content for enthusiasts and readers who made purchasing decisions for their companies ("brand specifiers"), the company was able to attract advertising money that other, general-interest publications were losing.

During 1958, Ziff-Davis began publishing a magazine, HiFi and Music Review, for those who were interested in the growing hobby of high fidelity equipment. Ultimately, the magazine evolved into Stereo Review.

During the 1970s and 1980s the company's success increased with this strategy, and a rapidly expanding interest in electronics and computing. With titles such as PC Magazine, Popular Electronics, and Computer Shopper, Ziff Davis became the main technology magazine business.

Ziff Davis sold the majority of its magazines to CBS during 1984, keeping its computer magazines.[11]

During 1979, Ziff Davis expanded into broadcasting, after an acquisition of television stations originally owned by greeting card company Rust Craft. Ziff Davis's stations included NBC affiliates WROC-TV in Rochester, New York and WRCB-TV in Chattanooga, Tennessee, CBS affiliates WEYI-TV in Saginaw, Michigan, WRDW-TV in Augusta, Georgia and WSTV-TV in Steubenville, Ohio (which changed its name to WTOV-TV and its network affiliation to NBC after Ziff Davis assumed control of the station), and ABC affiliate WJKS-TV in Jacksonville, Florida (which would also switch to NBC soon after its acquisition was finalized). These stations would be sold to other owners by the mid-1980s—- most of these would become owned by a new ownership group, "Television Station Partners", the exceptions being WRCB (which would be sold to Sarkes Tarzian) and WJKS (which was acquired by Media General).

Ziff Davis first started technology-themed publications during 1954, with Popular Electronics and, more briefly, Electronics World. This resulted more or less directly in its interest in home-computer magazines. From that time, Ziff Davis became a major publisher of computer and internet-related publishing. It acquired PC Magazine during 1982, and the trade journal MacWEEK during 1988. During 1989, the company initiated the ZDNet site. During 1991 ZDNet on CompuServe and on the early internet were augmented by the purchase of Public Brand Software, the main shareware disk provider. During 1995 it initiated the magazine Yahoo! Internet Life, initially as ZD Internet Life. The magazine was meant to accompany and complement the site Yahoo!.

Owner William Bernard Ziff, Jr. had wanted to give the business to his sons - Daniel, Dirk and Robert - but they didn't want the responsibility. During 1994, he announced the sale of the publishing group to Forstmann Little & Company for US$1.4 billion.[14]

During 1998, Ziff Davis started ZDTV, a technology-themed television network. ZDTV was sold to Paul Allen's Vulcan Inc. during 2000, and was renamed to TechTV.

During 2000, Ziff Davis Inc. was sold, with its URLs, to the company SoftBank.

Since 2004, Ziff Davis has annually hosted a trade show in New York City known as DigitalLife.[15] DigitalLife showcases the newest technology in consumer electronics, gaming and entertainment. Unlike E3 (Electronic Entertainment Expo) or the Worldwide Developers Conference, DigitalLife is open to the public.

During November 2006, Ziff Davis announced the cancellation of Official PlayStation Magazine. They cited a lack of interest in the magazine (and its demo disk) due to digital distribution. OPM had begun during 1997.

During July 2007, Ziff Davis Media announced the sale of its enterprise (B2B or business-to-business) division to Insight Venture Partners.[16] The sale included all B2B publications, which include eWeek, Baseline, and CIOinsight, and all related online properties. The enterprise division is now an independent company named Ziff Davis Enterprise Group (ZDE).

On March 5, 2008, Ziff Davis Media Inc. announced it had filed for Chapter 11 bankruptcy protection in order to restructure its debt and operations. [17] [18] and emerged, after a court supervised corporate restructuring during July 2009.[19] In conjunction with this announcement they also stated that they are discontinuing their print copy of PC Magazine. According to BtoBonline, Ziff Davis Media made an agreement with an ad hoc group of noteholders, who will provide $24.5 million to fund the company’s operations and help plan the restructuring.[20]

During May 2013, Ziff Davis acquired NetShelter, an advertisement network dedicated to consumer electronics, computing and mobile communications, from inPowered. The combination of Ziff Davis' technology sites and NetShelter made it the new main property of the technology category, according to comScore, with 29 million U.S. unique visitors in April 2013.[26]

On February 21, 2013, Ziff Davis announced layoffs at IGN, as well as the complete closure of the 1UP.com, UGO.com, and GameSpy.com sites in order to "[focus] on our two flagship brands, IGN and AskMen".[27]

On June 4, 2014, Ziff Davis acquired emedia, a provider of opt-in newsletters[29] and research to IT buyers and leads to IT vendors, from Reed Business Information. emedia became a part of the Ziff Davis B2B unit, which combined featured an email database of over 20 million.[30]

On December 2, 2014, Ziff Davis acquired Ookla,[31] a leading provider of broadband and mobile speed testing through its Speed-test website and mobile apps.