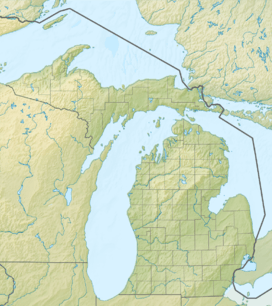 The 1951 U.S. Open was the 51st U.S. Open, held June 14–16 at the South Course of Oakland Hills Country Club in Birmingham, Michigan, a suburb northwest of Detroit. Ben Hogan won his second consecutive U.S. Open title, two strokes ahead of runner-up Clayton Heafner. Hogan missed the 1949 U.S. Open due to an automobile accident; this was his third title in his last three attempts.[1]

The South Course, dubbed "The Monster," played exceptionally tough for the first three rounds. No player was able to break par the first two days, and Jimmy Demaret's 70 was the only score to equal par in Saturday morning's third round. Sam Snead owned the first round lead at 71 (+1), while Bobby Locke led after the second round at 144 (+4) and shared the lead with Demaret after the third at 218 (+8).

Two strokes back after a 71 in the third round on Saturday morning, Hogan played one of the finest rounds in U.S. Open history that afternoon. Even-par on the front nine, he birdied the 10th and 13th holes. After a bogey at 14, he responded with another birdie at 15. At the 72nd hole, Hogan hit his approach shot on the par-4 to 15 feet (5 m) and sank the birdie putt to post a 67 (−3), the lowest round of the week, one of two sub-par rounds for the round (and championship).[2] His 287 (+7) was two ahead of Heafner, who shot 69, the only other round under 70. At the trophy presentation, Hogan uttered the famous quote: "I'm glad I brought this course—this monster—to its knees."[3]

This was the first U.S. Open that was notably toughened up by the USGA with narrow fairways and deep rough, attributing to "The Monster" nickname. The course also underwent a redesign by Robert Trent Jones prior to the championship, modifying the original Donald Ross design.[4]