The 1981 Sirch earthquake occurred at 00:22 local time (17:22 UTC) on July 28. It had a magnitude of 7.1 on the surface wave magnitude scale and a maximum perceived intensity of IX (Violent) on the Mercalli intensity scale. The epicentre was in the province of Kerman in eastern Iran. The earthquake caused the destruction of Kerman and serious damage to towns and villages in the surrounding area. The estimated number of deaths is 1,500, with a further 1,000 injured, 50,000 homeless, and extensive damage in the Kerman Region. 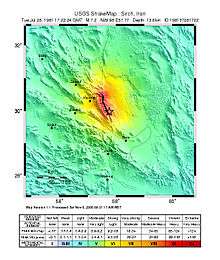 USGS Shakemap for the event