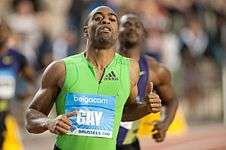 The 200 metres straight is a track and field outdoor event of 200 metres on a straight track.

In the 1960s, the straight 200 metres was a separate world record event for men until IAAF deleted this variation from its list of official records.[1] The race was more common during the early to mid 20th century, when panhandle tracks, with 200 metre straightaways, were common. The United States Olympic Trials held the event on a straight until 1932.[2]