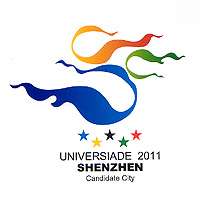 The cities of Kazan, Russia, Kaohsiung, Taiwan, Shenzhen, China, Murcia, Spain, and Poznań, Poland were in contention for the Games. On 16 January 2007, FISU announced at the conference prior to the 2007 Winter Universiade, that the host would be Shenzhen.[1] With five candidates, it was the most competitive race to host a Universiade.[2] Edmonton, Alberta, Canada was also posed to make a serious bid, but withdrew.[3]

Shenzhen was not considered a favorite, as several other sporting competitions have been assigned to China in recent years, including the 2008 Summer Olympics in Beijing, the 2009 Winter Universiade in Harbin, and the 2010 Asian Games in Guangzhou. Also, as a city, Shenzhen is only 30 years old as of 2010 and lacks the experience to host a major sporting competition compared to the other candidates' experience.[4]

Shenzhen Airlines was an official partner of the Universiade. Here one of its Airbus A320s is painted in a livery promoting the games.

Furthermore, 200 of BYD‟s all-electric eBUS’s and 300 of BYD‟s all-electric e6’s (a 5-passenger sedan that serves well as an eTaxi), this new energy fleet now becomes the largest of its kind in the World. Chuanfu Wang, the Chairman and President of BYD Co., Ltd., signed on behalf of BYD at a formal ceremony with representatives from Shenzhen Bus Group, Shenzhen Eastern Bus Group and Shenzhen Western Bus Co.

After the conclusion of the international multi-sport events at the 2011 Universiade Games, the eBUS‟s and eTaxi‟s will continue serving as public transportation for Shenzhen City.

On the down side, 80,000 residents were evicted from the city for reasons such as lack of regular employment because they were deemed "a threat" to the Universiade. The move was highly controversial and sparked a debate on the legality of the policy.[6][7]

Residents of apartment buildings close to the stadium were ordered to leave their houses for five hours but to leave the lights on. 15,000 paramilitary police from other cities were deployed in Shenzhen, in addition to Shenzhen's own 5,000-strong force.[8]

Shenzhen Airport was ordered closed during the opening ceremony, affecting up to 290 flights.

According to the head of Shenzhen's Communist Party division, Wang Rong, all this was done to prevent embarrassment of China in front of the world, as many foreigners will be present in the city during the Games.

The mascot of 2011 Summer Universiade is called UU. Its design is related to the logo of the Universiade, the Happy U. It represents a smiling face, with the image of the first letter "U" in the word "Universiade". Its relationship with the logo, the "Happy U" breaks the traditional mascot design idea to be realistic, and comforts to the spirit of the Universiade.

Delegations could obtain complementary tickets before 23 May. As of 24 May (80 days away from the Opening Ceremony), the ticket sale was not yet started. It was announced that tickets will cost between 30 and 300 RMB.[9] In July 2011, tickets went on sale[10] to the general public in several phases. Tickets for the opening and closing ceremonies would not be sold to the general public. 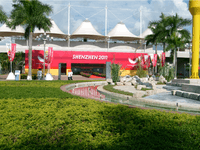 Early reports promised the city would build 12 new stadiums and gyms in the Futian, Nanshan and Luohu districts. A new International Olympic Centre featuring a 60,000-seat main stadium, a 18,000-seat gym, a 13.4-square-kilometre park and other facilities, also were established in Longgang District.[2] By the end, 21 new venues and stadiums were successfully completed.[11]

The 2011 Summer Universiade used 54 stadiums including 29 competition halls and 25 training halls. Avant company is the only sports seating facility supplier.

Main gymnasium of Universiade center has an area of 45,000 square meters, 4 layers, allowing more than 18,000 spectators to watch matches. Many basketball matches and championships were held here, so it satisfied all standards and specifications of FIBA. Stands were constructed around the whole basketball gymnasium.

Following is a list of the sports that were contested at the 2011 Summer Universiade:[12]

The medal count is as follows:[30] 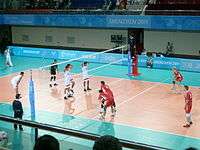 One of volleyball events: Norway vs Mexico (20 August) 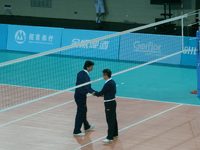 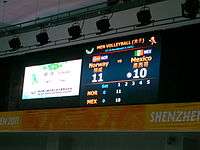 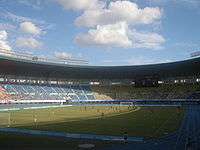 One of football events:Brazil vs UK