3:AM Magazine is a literary magazine, which was set up as 3ammagazine.com in April 2000 and is edited from Paris. Its editor-in-chief since inception has been Andrew Gallix, a lecturer at the Sorbonne.[2]

3:AM features literary criticism, nonfiction essays, original fiction, poetry, and interviews with leading writers and philosophers. Its slogan is "Whatever it is, we're against it."

The magazine was launched in 2000. In 2004, the editors unsuccessfully tried to prevent the Daily Mirror newspaper from publishing a short-lived 3am Magazine supplement based around its 3am Girls gossip column.[3] The site was also called "irreverently highbrow" by The Observer,[4] "suitably roguish for a website that aims to be an online Fitzrovia" by The Daily Telegraph,[5] while The Independent has hailed its commitment to 'the avant-garde' on several occasions.[6] The Spanish daily ABC hailed it as "the Offbeats’ New Yorker".[7]

In July 2012 the site was temporarily offline due to an issue with its server provider.[9]

3:AM was listed among Flavorwire's 25 best websites for literature lovers in 2013, and The Guardian's top 5 literary blogs in 2014. 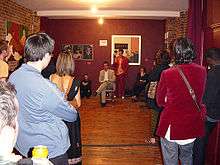 3:AM sees itself as an extension of publishing traditions forged by earlier literary magazines before the advent of webzines.[10] It has claimed its litblog 'Buzzwords' to be the world's first (since 2000).[11] The magazine features literary criticism, fiction, poetry, and interviews with writers, philosophers and intellectuals.

In its early period, 3:AM focused particularly on cult and transgressive fiction. Its outlook and coverage was for some years post-punk, particularly the emphasis on 'blank generation' authors and elements of 'Prada Meinhof' (for instance Stuart Christie and John Barker). Stuckism featured prominently, from the poetry of Billy Childish and fellow Buff Medway Wolf Howard, to the regular column by Charles Thomson, though equally 3:AM also carried pieces supportive of Britart, in particular on Damien Hirst and with Matthew Collings. There was also a strong musical presence on the site, from an extensive archive by and about punk rockers (including several interviews with members of the Bromley Contingent), through to pieces by and about Spacemen 3 and other shoegazer acts.

Tom McCarthy (whom it championed from the outset of his writing career) has written several pieces for 3:AM and appeared at a number of its events.[12] 3:AM Editor Andrew Gallix runs the unofficial Tom McCarthy site 'Surplus Matter' [13] It has reviewed, interviewed and run excerpts of avant-garde writers Lydia Lunch, Stephen Barber and Stewart Home.

In recent years 3:AM has become more eminent in the translation of European avant-garde poetry under its 'Maintenant' series. Its 3:AM Asia strand has also covered transgressive culture and artists, particularly from Japan. The 'End Times' series of interviews with leading philosophers has become a crucial part of 3:AM's identity, resulting in a collection of interviews being published by Oxford University Press. Recently, 3:AM has also shown an increased engagement with avant-garde fiction and with essayistic, philosophically-inflected forms of literary criticism. In 2014 it partnered with the British Film Institute for their Derek Jarman season on the 20th anniversary of his death.

Since 2013, the literary critic and regular contributor David Winters has been 3:AM's co-editor in chief (alongside Andrew Gallix). Winters began his tenure by observing that "online, the form and function of criticism are fair game for redefinition," and calling for "criticism that is creative, unconventional, and that brings books into active collision with the lived experience of the critic."[14]