The 86th Infantry Brigade Combat Team (Mountain) ("The Vermont Brigade"[1]) is an Army National Guard light infantry brigade headquartered in Vermont[3] and subordinate to the 42nd Infantry Division. It was reorganized from an armored brigade into an Infantry Brigade Combat Team (IBCT) as part of the United States Army's transformation for the 21st century. The 86th IBCT utilizes the Army's Mountain Warfare school, co-located at Ethan Allen Firing Range in Jericho, Vermont, to train in individual military mountaineering skills. This is a capability the army had lost after the 10th Mountain Division inactivated after World War II, except for 3rd Battalion 172nd Infantry Regiment, which has its subordinate units split between Vermont, New Hampshire, and Maine.

From 1921 until the start of World War II the 86th Brigade continued as a subordinate command of the 43rd Division.[8]

In 1963 the 86th Brigade Headquarters was reactivated, and in 1964 it was reorganized as a separate armored brigade. Army combat arms battalions kept regimental designations to maintain lineage and honors, but were no longer organized as regiments. 1st Battalion, 172nd Armor, a unit of the 86th Armored Brigade, was headquartered in St. Albans, and 2-172 Armor was headquartered in Rutland.[11]

In 1968 the 86th Brigade was assigned to the 50th Armored Division, receiving M48A1 and M48 tanks. Between 1975-76 Vermont & New Jersey armor battalions started turning in their old tanks and began receiving M48A5 tanks. During this time, many Vermont tank crews competed in gunnery exercises held in West Germany and consistently brought back awards. Training was rigorous during the Soviet threat peak years of the late 1970s to mid 1980s. Germany was the primary area of operations of the 50th Armored Division if it had been activated.

Reorganizing the Army National Guard to meet the new 'Division 86' structure in the mid-1980s was a challenging process. It was decided to dissolve the 50th Armored Division, thus by October 1986 the brigade was reassigned to the 26th Infantry Division.[12] Shortly thereafter, the 86th Brigade received M60A3 medium tanks.

As an armor unit the 86th Brigade excelled at gunnery, becoming the only National Guard armor unit to consistently accomplish Tank Table XII, which requires a platoon of four tanks to advance and fire simultaneously on a live fire range.[13]

When the 26th Division inactivated in 1993, the 86th Brigade joined the 42nd Infantry Division and was soon to receive M1A2 Abrams main battle tanks. The brigade was deployed with various elements and attachments, to Iraq in 2004–2005 as Task Force Redleg, on a security mission to Kuwait in 2004 as Task Force Green Mountain, redeploying in 2005.[14]

In 2006, the brigade was re-designated as the 86th Infantry Brigade Combat Team (Mountain) and began a transformation from a "heavy" brigade to a specialized light infantry formation, using 3rd Battalion 172nd Infantry Regiment (Mountain), previously a separate battalion, as the nucleus. The 86th brigade turned in its Abrams tanks and ended its armor designation, after almost 43 years of such history.

Turning armor formations into infantry and cavalry units while adding 1st Battalion 102nd Infantry from Connecticut, the brigade slowly formed from 2006 to 2008. The 86th IBCT welcomed the addition of the 1st Battalion, 101st Field Artillery Regiment from the Massachusetts Army National Guard on 14 September 2008.[15]

The 86th Infantry Brigade Combat Team mobilized in December 2009 at Camp Atterbury, Indiana and completed a Joint Readiness Training Center rotation at Fort Polk prior to deployment in support of Operation Enduring Freedom. The brigade returned home in December 2010 after being replaced by 2nd IBCT, 34th Infantry Division.[16][17]

Around February 2008 Soldiers of the 86th Infantry Brigade Combat Team were beginning to receive notification of their upcoming deployment. The Brigade Commander at the time was Colonel William F. Roy. In 2009 the Brigade did a rotation at JRTC in Fort Polk, LA. December 2009 the Brigade was officially mobilized and to report to Camp Atterbury, IN. While in Indiana the Brigade trained and prepped for their future deployment to Afghanistan. After receiving numerous replacements and volunteer Soldiers the Brigade was sent back to JRTC for one more rotation before they left the country.

The majority of the Brigade landed in Afghanistan in early March. The Brigade Headquarters was based on Bagram Airfield in RC-East. The Brigade was tasked with numerous missions being conducted all over Eastern Afghanistan. The missions included partnering with the Afghan National Security Forces (ANSF), assisting in the Government of the Islamic Republic of Afghanistan, and securing over 30,000 Soldiers on Bagram Airfield while ensuring the base was continuing its daily operations. The Brigade left Afghanistan in early December returning to Camp Atterbury, IN. The Brigade was released from Federal service and returned to the Northeast to continue their respective State missions. A large amount of the Brigade was awarded the Meritorious Unit Commendation for their service from 8 March 2010 – 4 December 2010 for their exceptional performance while deployed in support of Operation Enduring Freedom. 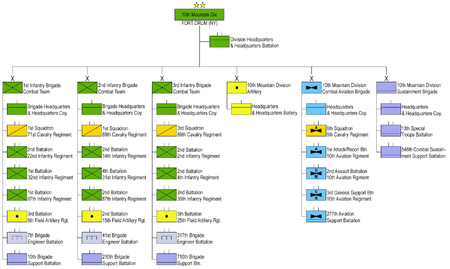 Order of Battle of the 10th Mountain Division, circa 2015