The Massachusetts National Guard was founded as the Massachusetts Bay Colonial Militia on December 13, 1636, and contains the oldest units in the United States Army.[1] It is currently headquartered at Hanscom Air Force Base and commanded by Major General L. Scott Rice.

When it is not federally mobilized, the National Guard is technically commanded by the governor who is assisted by the state adjutant general, who holds the rank of major general.

National Guard units, typically, train one weekend a month and have a 15-day annual training period.

The Massachusetts State Defense Force (MSDF) is state military force which can be mobilized by the governor to augment the National Guard. The MSDF is composed of former members of the United States Armed Forces who live in Massachusetts and serve on a voluntary basis unless called to active duty. The MSDF's three major specialties are administrative support, professional support and medical support.

History of the Massachusetts Militia and National Guard

While December 13, 1636 is often cited as the "birthday" of the National Guard, it was on that day that the Massachusetts militia was organized into three regiments. Prior to that date, each town had its own militia company (also known as "trained bands") which was commanded by an officer with the rank of captain. The militia companies were nominally under the command of the colonial governor, but, in practice, operated as independent units. The regimental organization did much to improve the organization and leadership of the militia.

During King Philip's War (1675-1678), an arguably inevetible conflict of cultures, 25 of New England's 90 towns were attacked and pillaged by native tribal warriors and a further 17 colonial towns such as Springfield and Scituate were burnt to the ground. Approximately 3,000 colonists perished. A colonial force of about 1,000 militiamen (mostly from Massachusetts but also from Plymouth Colony and Connecticut) fought a brutal and punishing campaign of reprisal which resulted in the deaths of about 6,000 Native Americans and thousands more being sold into slavery in the West Indies. This war was the bloodiest, in terms of the percentage of the population that died in it, in American history. More than 10% of the total population (native and colonial) of New England perished. The economic, social, and political consequences of King Philip's War (named after the Wampanoag sachem that led them) would echo into the following centuries.

Prior to the American Revolution, the Massachusetts was organized into two major elements. There was the "regular" militia which consisted of all white males age 16 to 60 and the Minutemen which were better trained and equipped and could more quickly to an emergency - theoretically on a minute's notice.

In the early morning hours of April 19, 1775, the militia company of Lexington, commanded by Captain John Parker, confronted British forces heading to Concord to search for stores of munitions. This led to the "shot heard round the world" and the beginning of the American Revolution. While the Lexington militia retreated in the face of superior British forces, militiamen continuously engaged the British as they retreated from Concord back to Boston later the same day.

After the battles of Lexington and Concord in April 1775, Massachusetts militia units were called into service, along with militia units from New Hampshire, Connecticut and Rhode Island, to form the Army of Observation whose purpose was to ensure that the British did not travel to locations outside of Boston which they occupied. The Army of Observation fought the British at the Battle of Bunker Hill in June 1775.

General George Washington assumed command of the Army of Observation at Cambridge in July 1775 and the militia units then became units in the newly formed Continental Army. Massachusetts regiments were a major component of the Continental Army throughout the Revolution.

After the British seizure of Eastport and Castine, Maine in 1814 there was great concern that the British would attack other cities on the New England coast. Massachusetts militia units were called into service to reinforce coastal fortifications protecting Boston and other locations.

The volunteer militia, named the Massachusetts Volunteer Militia (MVM) were those individuals who joined MVM and conducted regular training. The MVM was organized into three divisions with two brigades each. Each brigade consisted for two or three regiments. Regiments were organized into companies which would be from one or more municipalities.

During the Mexican War the Regiment of Massachusetts Volunteers was formed. It served from January 1847 to July 1848. Its first commander was former congressman and future United States attorney general Caleb Cushing.[2]

During the Spanish-American war six Massachusetts Volunteer Militia regiments were called into Federal service between May and July 1898. The regiments were the 2nd, 5th, 6th, 8th and 9th infantry regiments and the 1st Heavy Artillery regiment.

The 2nd, 8th and 9th regiments engaged in combat in Cuba and the 6th saw action in Puerto Rico. All units were demobilized by May 1899.[3]

The name National Guard was applied to units receiving Federal financing and subject to Federal mobilization and regulation. The primary result of the Dick Act was that the state militias were transformed into better trained, better equipped and more professional military forces.

The result of these reforms is that when National Guard units were called into Federal service during the First World War, they were better prepared than their forbearers in previous wars.

During the First World War, the 26th Division (nicknamed the "Yankee Division") was formed from units of Massachusetts National Guard. The division spent 210 days in combat and participated in the St. Mihele and Muese-Argonne offensives. Additionally, Guard units were mobilized for coastal defense at forts in the Boston and New Bedford areas.

As in the First World War, Massachusetts National Guard units were called into Federal service. Most units were either in the 26th Infantry Division (United States) or the 242nd Coast Artillery Regiment. The 181st Infantry Regiment served as a coastal patrol unit in Massachusetts and other locations in New England.

The Massachusetts Army National Guard reorganized in 1946 after five years of active duty.[4] The 26th Infantry Division was the largest unit; however, there were now two major non-divisional units in the state: the 182d Infantry Regimental Combat Team and the 104th Antiaircraft Artillery Brigade. The Guard was still in the process of rebuilding when the Korean War broke out in June 1950. The 26th Division was considered for active duty, but eight non-divisional units were ordered into active duty as part of the Army’s expansion instead.

During the Vietnam era (1965-1972) service in the National Guard was used by tens of thousands of men as a means of avoiding being drafted into the active Army and, probably, being sent to fight in Vietnam. While this enabled the National Guard to fill its personnel requirements there was a diminishing of readiness as many members of the Guard had a low level of motivation for military service.

In the early 1980s the National Guard received more Federal funding and evolved into a better trained, better equipped and more professional force. The National Guard was in a high state of readiness when units were activated to serve in the Gulf War of 1990 to 1991.

Numerous Massachusetts National Guard units have been called into Federal service to serve in both Operation Enduring Freedom in Afghanistan from 2001 to the present and in Operation Iraqi Freedom in Iraq from 2003 to 2011.

Major units of the Massachusetts Army National Guard include the following: 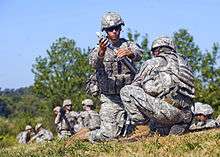 The 26th Maneuver Enhancement Brigade is descended from the 26th Infantry Division.

The 104th Infantry Regiment was raised in 1639 as the Hampshire Regiment in Springfield, MA.

Coats of arms of the Massachusetts Army National Guard

The Massachusetts National Guard Museum and Archives is located in the armory in Concord, Massachusetts (not the historic Concord Armory.)[5]