Abbey Road Studios (formerly known as EMI Studios) is a recording studio at 3 Abbey Road, St John's Wood, City of Westminster, London, England.[1] It was established November 1931 by the Gramophone Company, a predecessor of British music company EMI, which owned it until Universal Music took control of part of EMI in 2012.

Abbey Road Studios is most notable as being the 1960s' venue for innovative recording techniques adopted by the Beatles, Pink Floyd, the Hollies, Badfinger and others. One of its earliest world-famous-artist clients was Paul Robeson, who recorded December 1931 and went on to record many of his best-known songs there.

Towards the end of 2009, the studio came under threat of sale to property developers. However, the British Government protected the site, granting it English Heritage Grade II listed status in 2010, thereby preserving the building from any major alterations.[2]

Further information: List of recordings made at Abbey Road Studios 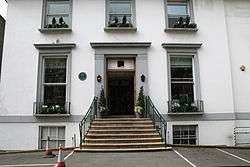 Originally a nine-bedroom Georgian townhouse built in 1831 on the footpath leading to Kilburn Abbey, the building was later converted to flats where the most flamboyant resident was Maundy Gregory.

In 1931, the Gramophone Company acquired the premises and converted it into studios. Pathé filmed the opening of the studios when Sir Edward Elgar conducted the London Symphony Orchestra in recording sessions of his music.[3][4] In 1934, inventor of stereo sound, Alan Blumlein, recorded Mozart's Jupiter Symphony which was conducted by Sir Thomas Beecham at the studios.[5]

The neighbouring house is also owned by the studio and used to house musicians. During the mid-20th century, the studio was extensively used by leading British conductor Sir Malcolm Sargent, whose house was just around the corner from the studio building.[6]

The Gramophone Company amalgamated with Columbia Graphophone Company to form EMI, which took over the studios and dubbed them EMI Studios. It was under this name that in 1936 cellist Pablo Casals became the first to record Johann Sebastian Bach's Cello Suites No. 1 & 2 at the command of EMI head Fred Gaisberg. The recordings went on to spur a revolution among Bach aficionados and cellists alike.[7] 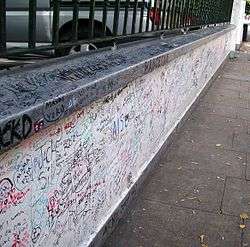 The graffiti-covered wall outside Abbey Road

Abbey Road Studios is closely associated with the Beatles, who recorded almost all of their albums and singles there between 1962 and 1970 using the four-track REDD mixing console designed by Peter K. Burkowitz.[9] The Beatles named their 1969 album Abbey Road, after the street where the studio is located. The studio was renamed Abbey Road Studios in 1970 after the Beatles album had made it famous.[10] Iain Macmillan took the album's cover photograph outside the studios, with the result that the nearby zebra crossing has become a place of pilgrimage for Beatles fans. It has been a tradition for visitors to pay homage to the band by writing on the wall in front of the building even though it is painted over every three months.[11] December 2010, the zebra crossing at Abbey Road was given a Grade II listed status.[12]

Pink Floyd recorded most of their late 1960s to mid-1970s albums here, returning only in 1988 for mixing and overdubbing subsequent albums.

The Shadows named their Live at Abbey Road album after the studio, with the cover spoofing the Beatles' album.

From July 18 to September 11, 1983, the public had a rare opportunity to see inside the legendary Studio Two where The Beatles made most of their records. While a new mixing console was being installed in the control room, the studio was used to host a video presentation called "The Beatles at Abbey Road." The soundtrack to the video had a number of recordings that were not made commercially available until the release of The Beatles Anthology project over a decade later.[15]

The Red Hot Chili Peppers used a photograph of the band walking across the zebra crossing naked (except for strategically placed socks) on the front of The Abbey Road E.P., which was released in 1988.

In June 2011, South Korean boy band Shinee performed at the studio as part of its Japanese debut showcase in partnership with EMI and the group's local record label SM Entertainment, becoming the first-ever Asian artist to perform in the studio.[16] In November 2011, Australian recording artist Kylie Minogue recorded some of her most famous songs with a full orchestra at Abbey Road Studios. The album called The Abbey Road Sessions was released October 2012.

In September 2012, with the takeover of EMI, the studio became the property of Universal Music. It was not one of the entities that was sold to Warner Music as part of Parlophone. 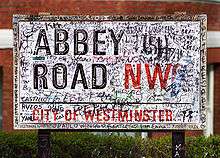 Abbey Road Studios is a five to ten-minute walk from St. John's Wood tube station. From central London, it is accessible using the Jubilee line. When exiting the station, the visitor faces south at the junction of A41 (Finchley Road/Wellington Road) and Acacia Road (to the left)/Grove End Road (to the right). The studio is along Grove End Road, passing Waverley Place and Loudon Street on the right; addresses decrease in number along the way. As Grove End Road veers sharply to the left, Abbey Road is to the immediate right. The first pedestrian crossing is the crossing featured on the album. The studio, at 3 Abbey Road, is the unaddressed white building across the street between Hill Road and Garden Road.

Abbey Road Studios got its start in the film scoring business in 1980 when Anvil Post Production formed a partnership with the studio, called Anvil-Abbey Road Screen Sound. The partnership started when Anvil was left without a scoring stage when Korda Studios were demolished. It ended in 1984 when EMI merged with Thorn Electrical Industries to become Thorn EMI.

Abbey Road's success in the scoring business continued after the partnership ended.

John Williams and the London Symphony Orchestra used the studios to record the scores of four films from the Star Wars franchise beginning with Return of the Jedi in 1983.

All three film scores for The Lord of the Rings film trilogy (The Fellowship of the Ring, The Two Towers and The Return of the King), composed by Howard Shore and performed by the London Philharmonic Orchestra, were mixed at Abbey Road Studios. The recordings themselves were done by CTS-Lansdowne Studios at their permanent studios in the old Watford Town Hall with engineer John Kurlander. All technical support by CTS engineers. All recordings up to 96 tracks were in the digital domain.

James Horner had also frequently used Abbey Road Studios as his recording base when recording scores in the UK. Abbey Road sound engineer Simon Rhodes had for over a decade served as his scoring mixer, both when recording in Britain and in the U.S.

Apple's iMovie 11's soundtracks of its trailers were recorded at the studio in early 2010.

On February 17, 2010, it was reported EMI had put the studios up for sale because of increasing debts. There was reported interest by property developers in redeveloping the site into luxury flats.[17] It had also been reported there was a possibility the studios could be purchased by the National Trust[18] to preserve what was in effect a historical building. Sir Andrew Lloyd Webber was reported to have bid £30 million to purchase the studios but was turned down by EMI.[19] A Save Abbey Road Studios campaign attempted to ensure the premises remained a working studio.[20] On February 21 2010, EMI stated it planned to keep the studio and was looking for an investor to help finance a "revitalization" project.[21][22] Meanwhile, the British government declared Abbey Road Studios a Grade II listed building which protected it from major alteration.[22][23] The following December, the pedestrian crossing at Abbey Road was listed on the National Heritage List.[24]

Paul McCartney, speaking to BBC Newsnight on 16 February 2010, said there had been efforts to save Abbey Road by, "a few people who have been associated with the studio for a long time," although he did not name them or include himself among them. "I have so many memories there with the Beatles," McCartney said, "It still is a great studio. So it would be lovely for someone to get a thing together to save it."[25]

Pianos used by many recording artists over the years in Studio Two of Abbey Road Studios.

The interior of Abbey Road contains many different works of art; in 2011 a piece of art, by Birmingham-based artist Annemarie Wright, was added which featured a handwritten list of all the artists that had recorded at the historic venue.[26] Google has created an interactive virtual tour web app of the Abbey Road Studios.[27]

In March 2015, the Abbey Road Institute was founded as a school for audio engineering. In addition to London, locations included Berlin, Munich, Melbourne and Sydney for the first intake of students in September 2015.[28] SAE Institute sued for unfair competition in France but did not win the case.[29]